Why student protests in South Africa have turned violent 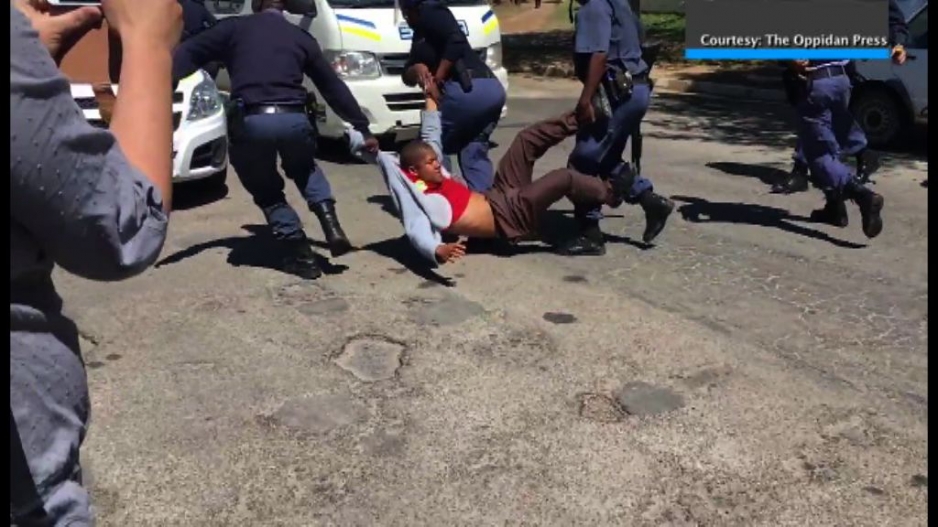 JOHANNESBURG, 28 September 2016 - Violent clashes have erupted between students and police at Rhodes University, in Grahamstown.

“Burn to be heard.” This chilling statement has been doing the rounds through word of mouth and social media on South African campuses in recent weeks.

The message has to be taken seriously. Buildings and vehicles at several universities have been burned since a new wave of protests kicked off in the middle of September 2016. The arsonists haven’t been identified yet, but government and university managements’ fingers are pointing at student protesters.

Some students have also used disruptive tactics to shut their campuses down until their demands for free education are met.

How have things come to this?

Protests that are sustained over a period of time are usually part of a cycle that unfolds in interaction with the authorities and other protesters. A cyclical analysis helps us to understand the chains of cause and effect leading to disruptive and even violent protests.

Social movement theorists Charles Tilly, Donatella Della Porta and Mario Diani have written extensively about why protests turn violent. Della Porta argues that movements become radicalised by two factors: escalating policing and what she calls competitive escalation. This is when protesters compete for space with political adversaries and other protesting groups.

If the police and private security guards are too quick to use violence – which has often been the case with the #feesmustfall protests – these interactions socialise the protesters into violence. Their actions create what sociologist William Gamson has called “injustice frames” around the state, where the state comes to be seen as fundamentally unjust.

State repression creates solidarity among movement participants, who justify the need for violence as a form of self-defence. As Della Porta puts it, violence emerges from violence.

The sad reality is that the authorities often ignore peaceful, non-disruptive protests. Outside the university context, civic organisations like Abahlali base Mjondolo have engaged in road blockades because their more conventional protests were ignored.

What students have deduced from this is that unless the “normal” functioning of an unequal educational system is disrupted, then it is unlikely to change.

Under the conditions prevailing at universities at the moment, disruptive protests should receive constitutional protection. This protection is supported by legislation.

The Regulation of Gatherings Act allows protests to be prohibited only if they cause serious disruption. Even then, the act states that municipalities and the police must consult with protesters before dispersing them.

What this means in the current context is that student sit-ins and their efforts to get others to join should be considered protected conduct, providing they seek to persuade rather than coerce those around them.

That is not how protests are being treated at South Africa’s universities. Ill-trained private security guards have been deployed on many campuses.

In addition several universities have limited protest rights through wide-ranging interdicts that prohibit all disruption. Interdicts are blunt instruments that prohibit particular actions on a blanket basis. This is problematic. They act as a form of prior restraint on expressive acts.

Other factors are at play too.

Actors within movements also compete with one another for influence. This happens particularly if a movement has won major gains, which was the case with #feesmustfall groups in 2015.

Recent protests suggest that sections of the student movement are competing with one another to “claim” any victories. Added to this has been the fact that major national political parties appear to be more active in trying to exert control over “their” student formations. Some student representatives have been warned not to discuss the governing African National Congress’ political leadership issues on campus.

Such behaviour erodes cross-party collaboration based on shared interests and common demands. It diminishes democratic decision making and non-sectarian approaches to movement-building. The #feesmustfall movement appears to have fallen victim to this affliction.

Sociologists have argued that political violence by protesters is rarely ever adopted overnight or consciously. Rather, in the early stages of the protest cycle, such violence is generally unplanned, small in scale and limited in scope. It often occurs as a spontaneous reaction to an escalation of force by the police or a more general closure of democratic space.

Many protesters are frightened off by the escalating violence, but small groups begin to specialise in tactics that do not rely on mass support – such as more organised acts of violence. This splits the movement even further as many do not agree with this shift. Most significantly, these tactical decisions shift the struggle onto a terrain that is dominated overwhelmingly by the state and its repressive apparatus.

This cycle is now manifesting itself on several South African campuses. Its emergence makes the official narrative – last year, the student movement was noble, but this year it has lost its legitimacy and descended into violence – ring hollow.

This narrative fails to take into account how official overreaction to 2015’s largely peaceful protests, and continued overreaction this year, has escalated and radicalised the protests. From early on, universities responded to the protests by pursuing securitised approaches to them. Now they are reaping the whirlwind.

At the same time, movement actors need to focus on those demands, strategies and tactics that build mass movements, and reject those that don’t. Regressive elements promoting racism, sexism, homophobia and violence need to be called out.

It is the easier route for universities to say and do “security” in response to growing campus unrest. But it is also the more simplistic road. There is enough scholarship to show that this road leads nowhere. University actors must do more to break with this self-fulfilling prophecy.

Jane Duncan’s new book, Protest Nation: the Right to Protest in South Africa has just been released by UKZN Press.

Jane Duncan, Professor in the Department of Journalism, Film and Television, University of Johannesburg