Oscar Trial: Pistorius is a consolidation of two different people 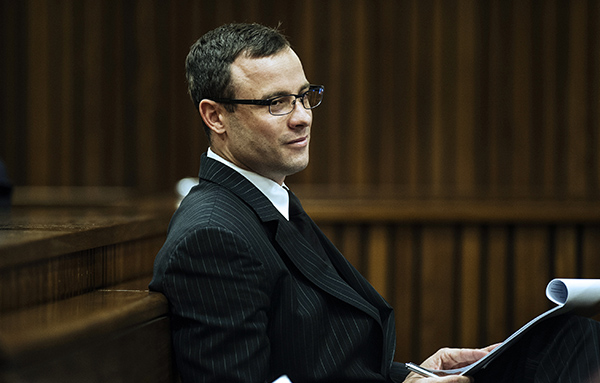 Pretoria - Oscar Pistorius reacts while sitting in the dock during his murder trial at the North Gauteng High Court in Pretoria on July 2, Day 36 of his trial.

PRETORIA – Oscar Pistorius could be seen as two different people: a tall, strong, supremely abled individual and a short, vulnerable, anxious person who constantly feared for his safety.

Descriptions of these two different versions of Oscar Pistorius emerged in the North Gauteng High Court on Thursday where the athlete is on trial for allegedly murdering his girlfriend, model Reeva Steenkamp.

The state has accused Pistorius of being a reckless individual with little regard for the law, who was involved in an angry altercation with Steenkamp in the early hours of the morning on February 14 last year. The state alleges Pistorius shot at her four times after she locked herself in the toilet.

Pistorius claims that he woke in the night – vulnerable on his stumps – and was moving fans from the outside balcony into his darkened bedroom when he heard a noise in the bathroom and, in a state of panic, he armed himself and approached the bathroom. He fired out of fear when he heard the sound of the toilet window moving.

The state has argued that Pistorius’s alleged reaction to a perceived threat was not logical as he failed to check on his partner’s safety, failed to flee from the danger and instead approached it on his stumps.

Sports medicine expert and the Parlympic team doctor, Professor Wayne Derman, on Thursday continued to give his evidence in chief as a defence witness who could speak about Pistorius’s challenges as an amputee and why his reactions to danger would be different to those of normal individuals.

Defence counsel Kenny Oldwadge said Pistorius’s evidence when describing the shooting was: “I was not thinking. I just fired.” He also asked why

Derman said this made sense as Pistorious’s amygdala function – the body’s natural priming for the eventualities of fight, flight or freeze – would kick in when faced with a perceived danger

“In this context, the individual has no lower legs and so to flee is not an option. To confront the danger is the only reaction that makes sense. Fighting is a logical decision,” Derman said.

Derman said Pistorius without his legs represented “a different person to who he is with his prostheses on”.

On the one hand, Pistorius’s “significant disability” meant that without his artificial legs he was significantly shorter than the average man, walked awkwardly, experienced pain and had poor balance. With his legs, Pistorius was 1,84m tall and an Olympic athlete.

“Mr Pistorius is one of 18 fastest individuals in the world – even including able-bodied people. And this template of a supremely abled individual causes a significant stress on him,” Derman said.

He said the image of an extreme achiever was countered by the realities of a disabled person: someone excluded from social activities because can’t walk long distances, who has to use a handle and seat in the shower, has difficulties with self-care, embarrassed by his prosthetics, insecure in large crowds and suffering balance issues.

Derman said athletic coaches use gun cracks to elicit a startled response in athletes – and therefore athletes were primed to react to a loud sound.

“Could this relate to an incident where a sound is heard in the bathroom, prompts him to react in fear?” Oldwadge asked.

Derman said this was the case, with three independent studies by different universities all having found that startled responses were exaggerated in the dark.

Derman said he would agree with the psychiatric report’s findings that Pistorius felt vulnerable on his stumps. He had commented: “I am stuffed without my legs.”

As a result he had sought out a firearm that was lighter and smaller than the average in order to defend himself.

Derman said this made sense.

The case continues. Prosecutor Gerrie Nel is to cross-examine Derman.