In Pictures: The Joy of Jazz 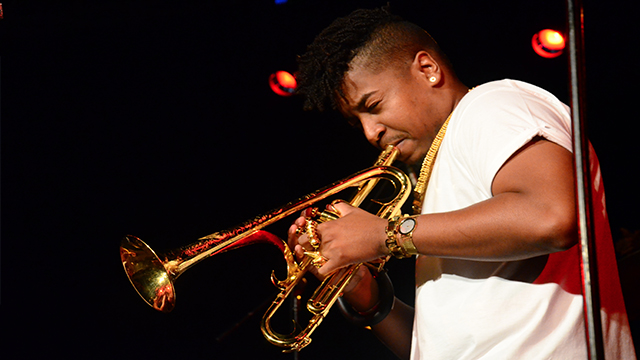 The 17th Standard Bank Joy of Jazz kicked off at its new home at the Sandton Convention center this weekend. The festival hosted over a 100 performers and had jazz fans moving to the sounds of many great South African and International Jazz musicians. S

JOHANNESBURG - The Sandton Convention Centre became the home of the 17th Standard Bank Joy of Jazz which took over the popular venue.

Thousands of jazz lovers flocked into the venue to see international jazz greats like Herbie Tsoaeli, Gregory Porter and Dianna Reeva and the younger generation of jazz musicians from Samthing Soweto and Christian Scott to Kyle Shepheard.

The venue was at a constant buzz with four stages hosting performance after performance, with each artist bringing their own flare and musical genius.

Faya Faku took the fans on a journey across spiritual plains and narrated a story of love, calm and remembrance. Gregory Porter took center stage filling the Dinaledi stage area to capacity. In the audience former South African president Thabo Mbeki sat attentive with a smile on his face, apparently transported by this lyrical artist.

US Grammy Award-nominated jazz trumpeter Christian Scott thrilled audiences throughout the weekend with his own brand of jazz.

Scott, in my opinion, is a new fresh brand of traditional jazz like Nduduzo Makhathini’s beauty and eloquence in front of the piano.

At the Mbira stage Samthing Soweto, part of Sounds of Democracy, took to the stage amid a wave of screams and whistles. He positioned himself at the center of the stage and, as if willing some power beyond himself, opened his vocals and sent the whole space into a frenzy. He ended his set with Yvonne Chaka Chaka’s Not Yet Uhuru. His singing was like a blessing onto the crowd.

Aside from malfunctioning escalators and sometimes a seeming lack of organisation to direct fans from one stage to the next, the new venue held up and provided for an unforgettable jazz experience.