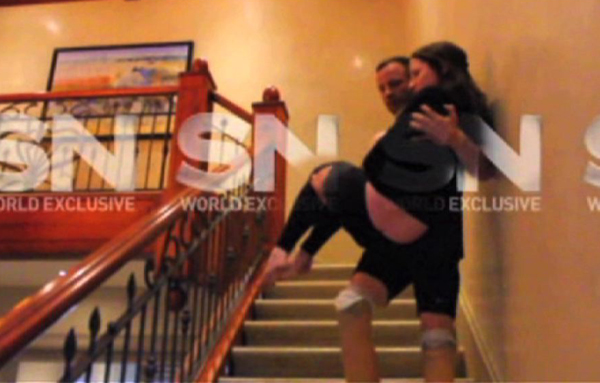 A screenshot from the video aired by Australian Channel 7 simulating Oscar Pistorius carrying Reeva Steenkamp down the stairs of his Pretoria home.

JOHANNESBURG - A media statement has been released by Brian Webber of Ramsay Webber Inc, part of Oscar Pistorius&39;s defence team, in reaction to the airing of a video showing a simulation of Pistorius on his stumps carrying Reeva Steenkamp down the stairs of his Pretoria home.

The statement notes that, &39;In October 2013, the Defence Team engaged the services of The Evidence Room, A US-based company specialising in forensic animation.

The company was engaged to visually map the events on the night of the accident. As part of this process, certain video footage was filmed. The &39;visual mapping&39; was for trial preparation only and was not intended to be used for any other purpose."

An Australian broadcaster, Channel 7, is believed to have purchased this footage  from The Evidence Room and presented it on air.

Webber says, "We wish to make it very clear that the material that has been aired was obtained illegally and in breach of the non-disclosure agreement with The Evidence Room.

"Its usage also constitutes a breach of privilege as this material was produced for trial purposes on the instructions of a commissioner, and the ownership of the copyright vests in the commissioner. No permission for the disclosure thereof has been given."

Webber states further that the Pistorius family consider this a &39;staggering&39; breach of trust and an invasion of their families privacy. They believe that the footage was purchased unlawfully, and its airing violates an undertaking given that no material would be aired before the end of the trial.