eNCA Ipsos poll: Consistency in voting in the three most contested metros 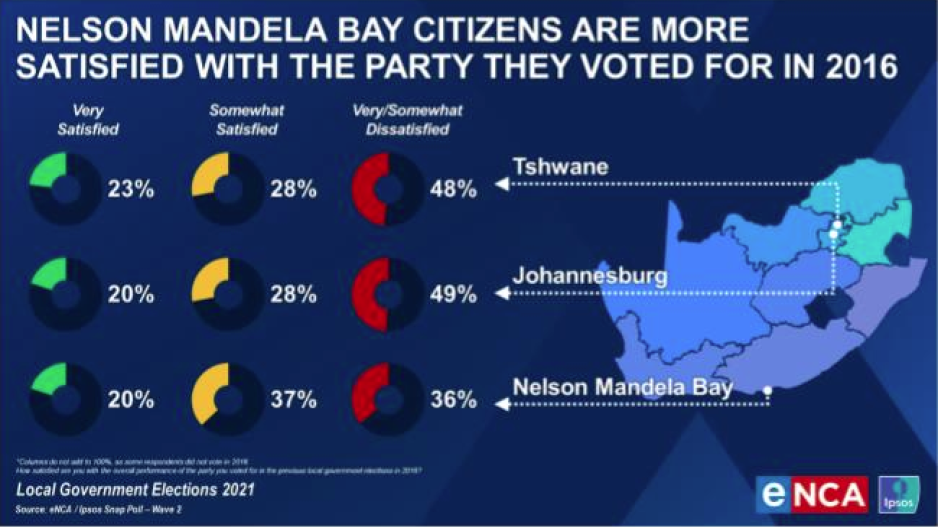 With feelings of unsatisfactory choices for political parties in 2016, will South Africans vote the same again?

In spite of the fact that less than half of registered voters in Johannesburg and Tshwane are happy with the party choices they made in 2016, the vast majority will vote for the same parties as before.

This is one of the findings of a recent pre-election study conducted by Ipsos, on behalf of eNCA. Wave 2 of the study was undertaken between 15 and 25 October 2021. This wave focused on the three most contested metropolitan areas of Johannesburg, Tshwane, and Nelson Mandela Bay. All interviews in this wave have been done face-to-face in the homes and preferred home languages of randomly selected respondents.

The 2016 legacy is not seen as positive, but voters will return for more.

Respondents were asked: “How satisfied are you with the overall performance of the party you voted for in the previous local government election in 2016?”. In Johannesburg and Tshwane close to half said that they were very or somewhat dissatisfied with their previously chosen party’s performance, while registered voters in Nelson Mandela Bay were more forgiving, with 57% indicating that they were either very or somewhat satisfied with their party’s performance. 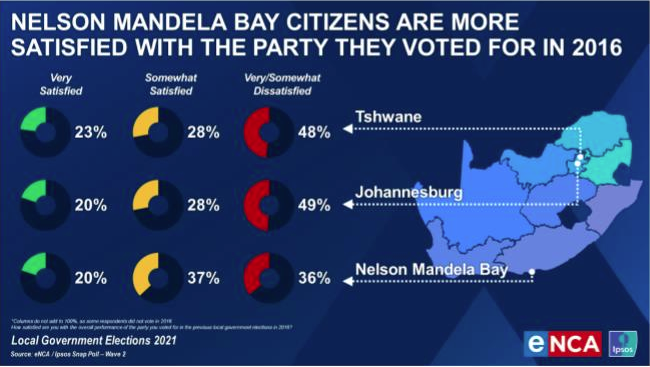 Nevertheless, when probed on whether they will support this party or another in Monday’s local government elections, four out of every five (80%) of registered voters in Johannesburg, and even higher proportions of 85% in Nelson Mandela Bay and 86% in Tshwane, indicated that they will vote for the same party again.

Why would South Africans be so forgiving, despite their negative experiences?

A wide variety of different reasons were mentioned; however, no single reason was mentioned by more than half of registered voters in each area. Trust in the party was the most important reason in all three metropolitan areas, but it was of the most importance in Tshwane. Another reason mentioned by registered voters in the capital city was that they will choose the party, because they always vote for it… the words “I just do” probably indicating that voters do not give this a lot of consideration.

In all three metropolitan areas, there were between about a fifth and a quarter who said that they would vote for a “new party” – for a variety of reasons. Issues like corruption in the “old” party, a desire for change, the capabilities of the new party and trust in leadership were mentioned as reasons to switch. This proportion is big enough to ensure some interesting – and perhaps unexpected - results in the local government elections. 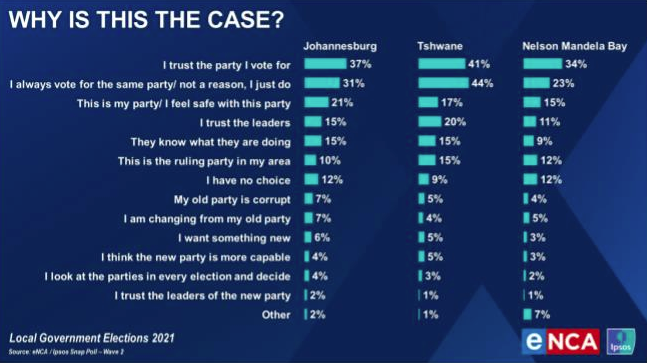 Should parties work together or not?

About a quarter in each metro indicated that they would support coalition forming, but that they would not be too happy with this outcome, while a slightly smaller proportion said that they first wanted to see how things worked out in the coalition government, before they made up their minds about it.

It could possibly be attributed to the feeling described in the saying of “one bitten, twice shy” as far as coalition governments are concerned. A minority said that they were totally opposed to coalition forming and that they would even consider not voting for their party again. 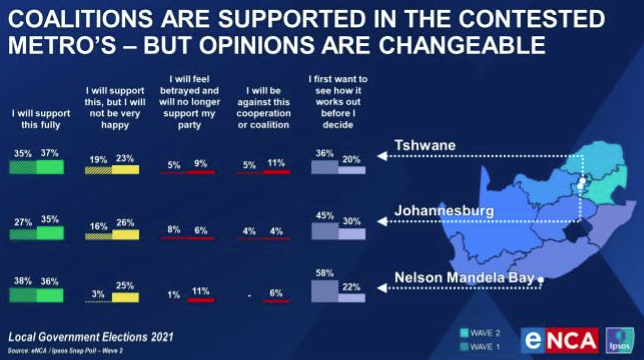 · A total of 1,494 Personal, Face-to-Face interviews were conducted from 15-25 October in the three heavily contested metropolitan areas.

· 490 interviews were conducted in Tshwane, 506 in Johannesburg and 498 in Nelson Mandela Bay with South Africans who are18 years old or older and who are registered to vote. IEC registration figures were used to weight the data.

· The Margin of Error (depending on sample size, response rate and sampling methodology used) on this sample is between 1.91 and 4.38 percentage points on a 95% confidence level – to be considered for each metropolitan area separately.

· eNCA is South Africa’s most trusted independent TV channel and online news brand. It launched on June 1st, 2008 on DStv channel 403 as the country’s first 24-hour television news service. Since then, the channel’s signature live reports, breaking news, sport, weather, entertainment and business updates have become an indispensable source of local and international news for millions of South Africans. The news brand prides itself on being the voice of all South Africans, producing all news with No Fear No Favour.

· Our passionately curious research professionals, analysts and scientists have built unique multi-specialist capabilities that provide true understanding and powerful insights into the actions, opinions and motivations of citizens, consumers, patients, customers or employees. We serve more than 5000 clients across the world with 75 business solutions.