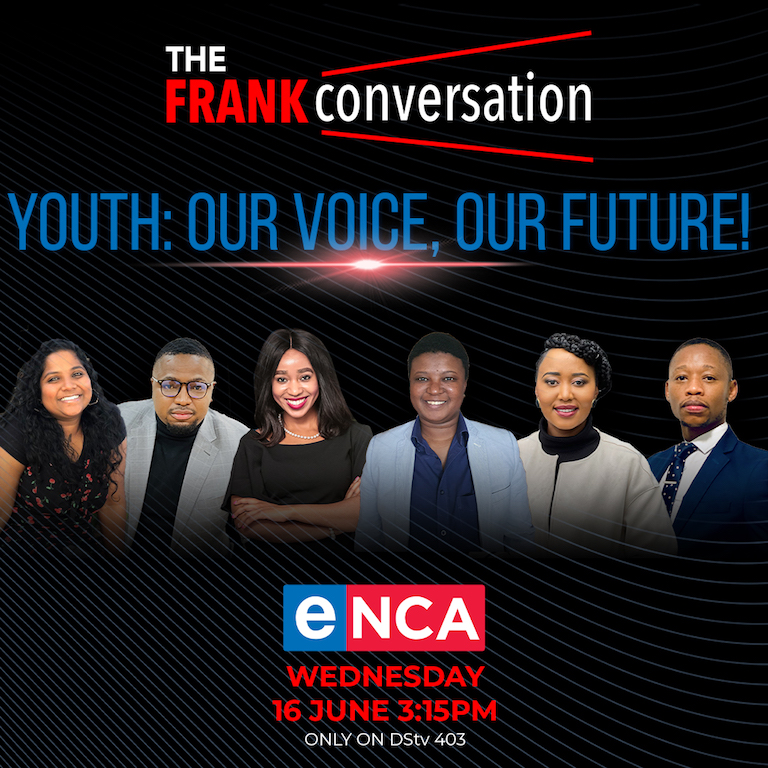 JOHANNESBURG - eNCA’s The Frank Conversation brings together a panel of guests who are conversant with pertinent issues that challenge South African youth.  The esteemed panel understand where the youth fit in with regards to their knowledge of and participation in the economy, education and political sphere.

The Frank Conversation airs on Wednesday, 16 June at 3:15pm and is hosted by eNCA anchor Masego Rahlaga. Rahlaga is joined by guest panelists Siyabonga Magadla, Entrepreneur and Director of Imbewu Consulting, Pearl Pillay the Managing Director of the Youth Lab, Rebone Tau a Political analyst and published author for The Rise and Fall of the ANC Youth League, Cikida Gcali-Mabusela the chair of the Memberships Committee for BWASA’s Gauteng branch and Prof Cameron Modisane an Associate Professor in the College of Accounting Sciences at the University of South Africa.

“The youth of South Africa constitute one-third of the population and yet are the most impacted economically. We see the stats of unemployment grow each quarter and the youth sector are hardest hit. Fees must fall protests have become a regular call in South Africa and youth representatives in the political space are scarce.  As a news broadcaster, these are the conversations that we strive to have so as to build meaningful dialogue that can carry our nation forward to a better tomorrow.” says John Bailey, Managing Editor at eNCA.

Pearl Pillay joins Masego Rahlaga as a guest anchor alongside Cikida Gcali-Mabusela. Pillay is a youth development practitioner based in Johannesburg. She is currently the Managing Director of Youth Lab; a national youth think tank that aims to mainstream youth participation in community development and policy making. Pillay has worked in different countries around Africa, training public officials on how to make their policies more beneficial for the young, and most recently, Pillay was elected as an executive board member of the African Movement for Democracy. “We have a Minister of Education who has been there for decades, but when you ask her about the number of schools with pit latrines, she can’t tell you and nobody blinks. Fire all these ministers and get people who can get the job done” was Pearl Pillay’s heated response when speaking on the education crisis in South Africa.

Professor Cameron Modisane joined the panel for the education discussion. He has great passion when it comes to giving young South Africans access to education and getting government more involved with programmes to train youngsters on technology to get them job ready for future career opportunities

We also explore the significance of youth participation in the economy. In its report, Stats SA highlights the persistently high youth unemployment rate which has long been one of the most pressing socio-economic problems in South Africa. Some of the young work-seekers are not well educated and do not possess sufficient skills and previous work experience as demanded by employers in the labour market. It makes it difficult and lessens the chances for young people to find employment, which ultimately results in some losing hope of ever finding a job and they join a growing band of discouraged work-seekers. This was proven by the stats released where 1,9 million young people without work were found to be discouraged from looking for work. Siyabonga Magadla who is the Managing Director of Imbewu Consulting is well versed in the role that youth play currently in the economy and the challenges that need to be addressed. Magadla is also a member of the SA Youth Chamber of Commerce (SAYCC). He is a  committed advocate for youth participation in economic activities in the country, convener of the annual SMME Sustainability Summit, which is a gathering of young entrepreneurs in South Africa endorsed by the Ministry of Finance.

A survey of 36 African countries by Afrobarometer – a pan-African, non-partisan survey project that measures citizen attitudes on democracy, governance, the economy and civil society – shares that African youth exhibit the lowest levels of political and civic engagement compared with other age groups. Cikida Gcali-Mabusela, the other guest anchor, admits to there being tensions between the SA youth and politics. Gcali-Mabusela who is the chair  of the Memberships Committee for BWASA’s Gauteng branch is also founder of ‘As You Lead’ a leadership platform for African leaders.

The conversation on youth participation in politics was also joined by Rebone Tau who has deep roots in the African political landscape. Tau was with the Southern African Liaison Office for 10 years as the Senior Program Manager. In 2012 she was invited by the Foreign & Commonwealth Office in Britain to meet the Deputy Minister and the EU Parliament to engage on challenges facing the continent. In 2014 Tau was a delegate at the Pan African Youth Union Conference which was hosted by South Africa and was also part of the Young Leader Program hosted by the Communist Party of China representing the ANCYL National Task Force. In January 2020 she joined the Rosa Luxemburg – Stiftung Foundation as their Program Manager for Political Affairs focusing on South Africa, Zimbabwe, Mozambique and Namibia. “There aren’t many engagement platforms for youth. Young people are hungry and want change, and as long as this does not happen, there will be a revolution similar to the fees must fall marches” says Tau.

The Frank Conversation will air on DStv channel 403 on Wednesday, 16 June at 3:15pm and once it has aired, it will be available on enca.com.