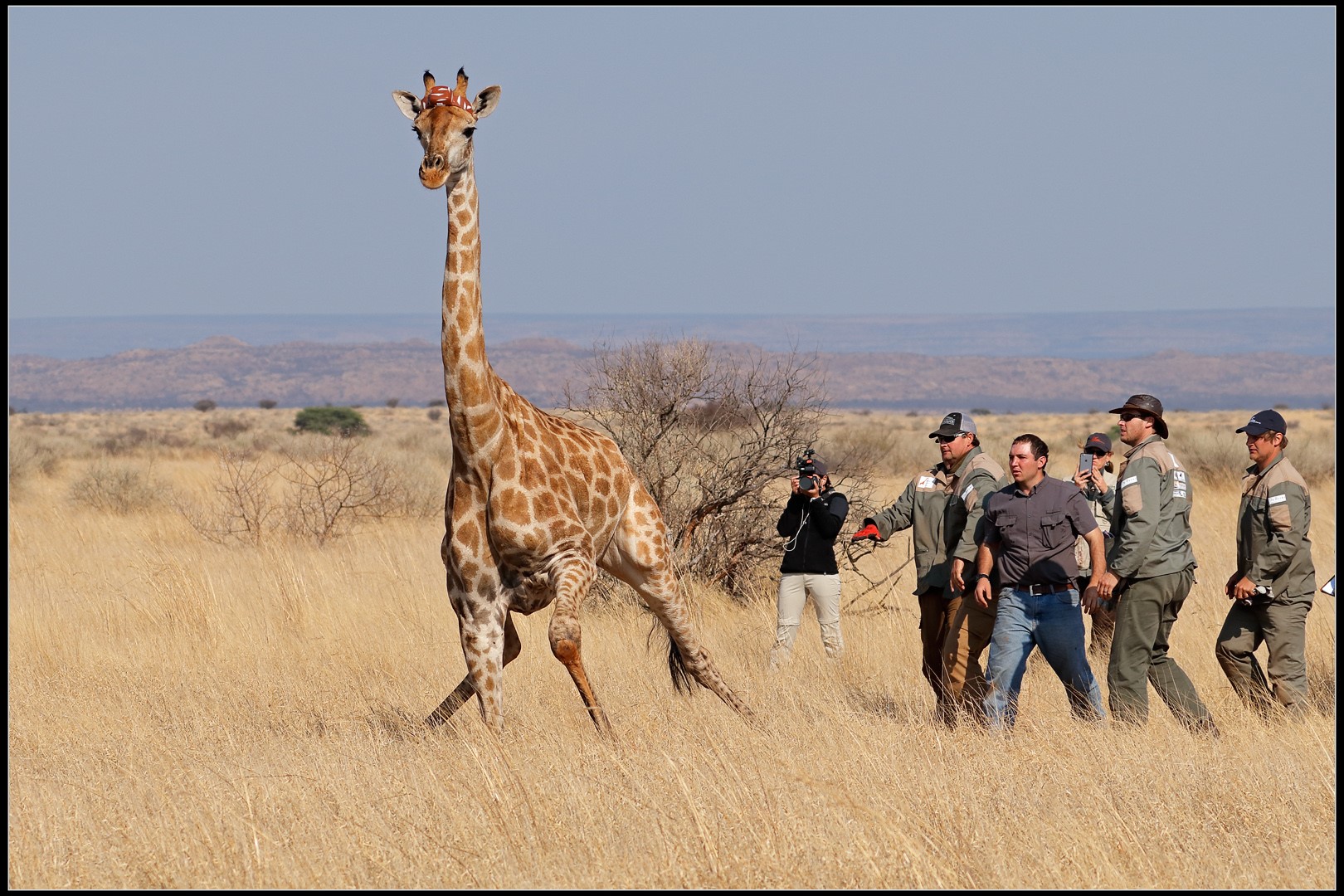 The research team helps a giraffe to get up after collecting data. Picture: Supplied

To understand why giraffes have lost more than 80% of the population of some of their subspecies in Africa and are facing extinction in the wild, researchers at the University of the Free State (UFS) in South Africa (SA) are looking into their strange ‘patchwork grazing’ habit – eating in one area but avoiding an identical area.

Researchers at the University of the Free State in South Africa are using drones and GPS tracking devices to establish giraffe eating and movement patterns. It has shown that giraffes will eat in some areas and avoid others with exactly the same vegetation. This strange behaviour lies at the heart of the research, and researchers hope it may offer insights into why giraffe numbers are plummeting.

The UFS is the Africa-based institution that has contributed the most to giraffe research and conservation strategies in Africa. It is the leading university in the collection and analysis of information about giraffes and their habitats, increasing conservation education awareness about giraffes and African biodiversity, and developing national and/or regional plans aimed at giraffe conservation. On the UFS campuses, there are seven different departments involved with giraffe research or postgraduate projects. These departments include Zoology; Chemistry; Food Science; Microbiology; Genetics; Physics; and Animal, Grassland and Wildlife Sciences.

Senior Lecturer in the Department of Chemistry, Dr Marietjie Schutte-Smith, says the unique collaborative research being done in South Africa could help save giraffe subspecies from the brink of extinction – as South Africa has managed to double its giraffe numbers while the subspecies have declined tremendously. 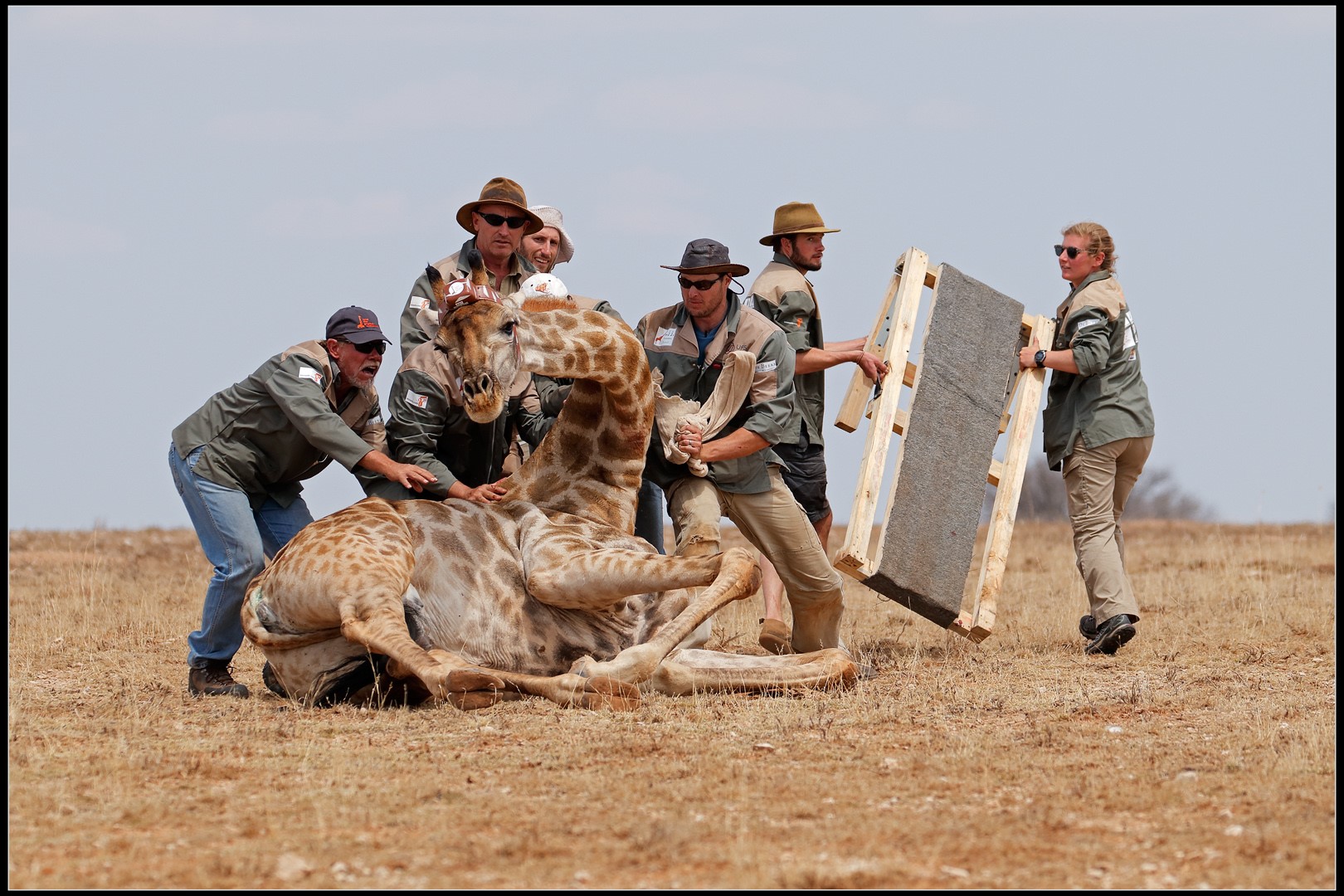 The research team helps a giraffe to get up after collecting data. Picture: Supplied

Wildlife habitat expert, Dr Francois Deacon, says until recently, they have captured 70 giraffes, most of which were fitted with GPS satellite units to aid ecological research through remote collection of data on their movements and home ranges.

“Giraffe numbers on the continent are declining fast, demonstrating the lack of knowledge about their required habitat needs, use of space, and diet. With habitat destruction and fragmentation of resources, we realised that while few quality resource areas still exist that are available for roaming by giraffe and habitat selection, principal and preferred food species will surely play a significant role in home range size and overlap between individuals.”

“For example, data from our collared giraffes indicated that they used an average annual home range of 206 km² (20 602 ha) with a core home range calculated by a 50% MCP of 10,1 km² to try and meet their annual needs for survival and reproduction in their preferred vegetation. In the wet, hot season (summer: December to February) when food was abundant, giraffes frequented smaller areas (average 177 km²), while in the dry, cool season (winter: June to August) the mean giraffe home range size increased to approximately 245 km². Rainfall influenced giraffe spatial distribution, since it determined vegetation productivity and leaf phenology,” explains Dr Deacon.

He adds: “Giraffe numbers in SA have doubled at the same time that giraffe numbers in the rest of Africa have plummeted tremendously. It is simply because of the wildlife industry, where private game ranches or reserves can own any wildlife species. This way, we have bred and protected them in a sustainable manner for ecotourism. Basically, all these private game ranches and reserves want to own giraffe and maintain them sustainably, since all tourists and visitors on these ranches and reserves want to see a giraffe. It’s a win-win situation that is well regulated with permits, nature conservation approvals, and legislation.”

In winter, the overlap was approximately 31% and in autumn approximately 23%. During the wet and warmer months, overlapping was 15% in summer and 19% in spring, respectively. The percentage of time spent in different types of vegetation areas was influenced by the abundance of the principal food species of that plant community, according to Dr Deacon.

Why some animals prefer or avoid some habitats

“By using modern analysis techniques and instruments (such as drones and GPS devices), it is possible to study complex environments on a spatial ecology scale, which has created the opportunity to investigate why some animals prefer or avoid some habitats,” explains Dr Deacon.

“This in turn opened the door to explore geographic, soil, and nutritional qualities that the giraffe might prefer or avoid. This is one of the main reasons why we are exploring the different factors and driving forces behind a large herbivore’s habitat selection, well-being, body condition parameters, and physiological adaptations,” Dr Deacon says.

Veld conditions, plant species composition, tree densities and other available resources such as production yield and water quality determine reproduction successes and how animals disperse, move, and distribute over an area. Spatial and ecological distribution of giraffe specifically depend on habitat resources and qualities, which in turn affect their complex behavioural tactics and survival.

The research was started back in 2010 by Dr Deacon and Prof Nico Smit from the Department of Animal, Wildlife and Grassland Sciences at the UFS, using pioneering GPS devices to investigate giraffe spatial ecology and habitat use. “The current study was initiated as to why the giraffe would utilise one area more than the other, even though the two habitats had the same tree species,” says Dr Schutte-Smith.

Dr Deacon contacted Prof Hendrik Visser and Dr Schutte-Smith from the Department of Chemistry for a possible collaborative effort. Ms Jeaneme Kuhn started her MSc research degree on this project in January 2019 and completed her degree in August 2020 with distinction.

Dr Schutte-Smith says from research done at Rooipoort Nature Reserve, it was found that a certain group of giraffes had the strange habit of only eating from specific trees, avoiding similar trees a few metres away. “We wanted to see if this behaviour was due to chemical influences, i.e., if there are specific minerals that are possibly in excess at some places which they avoid, especially since there are mines close by.”

Aim of the research

The main aim of this MSc Chemistry degree, according to Dr Schutte-Smith, is to validate an analytical method for testing leaves and soil samples, using IPC, to see if heavy metals (in excess) are present in the soil, leaves, and water and whether this has an influence on the browsing pattern of the giraffes. “Then, as secondary aims (for the collaborative effort), we would like to investigate whether the giraffe can select one area over the other (core home ranges), to understand what the qualities are that they would select in the preferred area and which qualities they would avoid in the other. And lastly, to understand what the minimum requirements are to keep the animals happy and healthy, but also to investigate how they search for these qualities,” says Dr Schutte-Smith.

Besides creating awareness of the plight of giraffes, the researchers also aim to create a model for conservation via research and education, to be used as an example for other countries. This model incorporates students, academia, professionals, sponsors, and stakeholders, covering various topics related to giraffe education, management, and conservation.