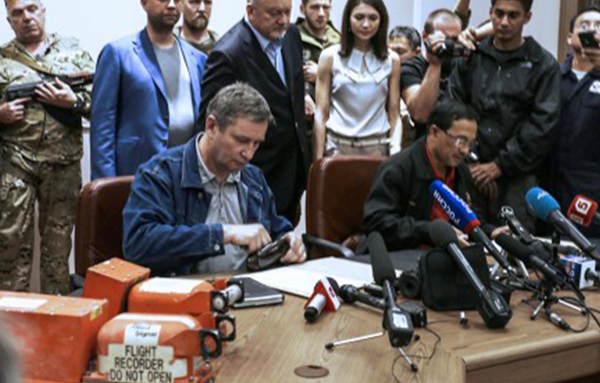 July 22 - A Donetsk People's Republic official (left) and Colonel Mohamed Sakri of the Malaysian National Security Council sign documents during the handing over to Malaysia of the two black boxes recovered from the crash site of the MH17 jet.

WASHINGTON - Malaysian flight MH17 may have been shot down by "mistake" by ill-trained pro-Russian separatists, US intelligence officials said Tuesday, while dismissing Moscow&39;s accounts of the incident.

Evidence gathered so far suggests separatists launched the SA-11 surface-to-air missile that blew up the Malaysian airliner, but it remains unclear "who pulled the trigger" and why, said a senior intelligence official who spoke on condition of anonymity.

"The most plausible explanation was that it was a mistake," and that the missile was fired by "an ill-trained crew" using a system that requires some skill and training, the official said.

The intelligence official cited previous incidents over the years in which both Russian and US forces have mistakenly shot down civilian airliners.

A Korean airliner was downed by a Soviet fighter jet in 1983 and US naval forces mistakenly shot down an Iranian civilian passenger plane in 1988.

"We&39;ve all seen mistakes in the past," the official told reporters.

US satellite and other "technical" intelligence confirmed the airliner with 298 people on board was hit by an SA-11 surface-to-air missile from an area controlled by the pro-Russian rebels.

"It&39;s a solid case that it&39;s a SA-11 that was fired from eastern Ukraine under conditions the Russians helped created," the senior official said.

It appeared those who fired the SA-11 missile were relying on a lone radar that is part of a missile battery and not a larger network of radar that would give a more complete picture of air traffic, officials said.

The SA-11 is designed to be used in an "integrated air defence system" but with only one narrow radar beam, the missile launchers have "a much more fuzzy picture," said a second intelligence official.

Russian operatives have been spotted on the ground in eastern Ukraine but the US intelligence community had no explicit proof that Russians were with the SA-11 unit that fired on the airliner, officials said.

Although the United States had observed a flow of heavy weapons, including air defence systems, into Ukraine from Russia, intelligence agencies had not seen the larger SA-11 missiles being moved into the country before the airliner was downed, officials said.

The Russian military has been training the rebels at a large base in Rostov on various weapons, including air defence systems, officials said.

But it was unclear if the Russians trained the separatists on the SA-11 missile batteries, officials said.

The senior intelligence officials said they chose to brief reporters partly to counter what they called "misinformation" from Russia and its state-controlled media over the incident.

Russia and its proxies were staging a "full court press" to spread misleading propaganda about the downing of the airliner, the official added.

Allegations that the Malaysian Boeing 777 took evasive action in the air, similar to how a military plane might manoeuvre, had no basis and the reports amounted to "a classic case of blaming the victims," the senior official said.

The claim that the Ukrainian government had shot down the plane was not realistic, as Kiev had no such missile systems in that area, which is clearly under the control of the rebels.

That scenario would mean Ukrainian government troops would have had to fight their way into the area, fire at the passenger plane and fight their way out again, the official said.

Moreover, the Ukrainian government would have had to orchestrate claims by separatists on social media that they had shot down a plane.

"That is not a plausible scenario to me," the official said.

The Ukrainian government had no reason to be deploying surface-to-air missiles or other anti-aircraft weapons, as the separatists were not flying helicopters or staging bombing raids from the air, officials said.

But the separatists had a motive to use surface-to-air missiles, as they faced offensives by Ukrainian government troops relying on helicopters and cargo planes, they said.