Silva out to land Brazil Presidency 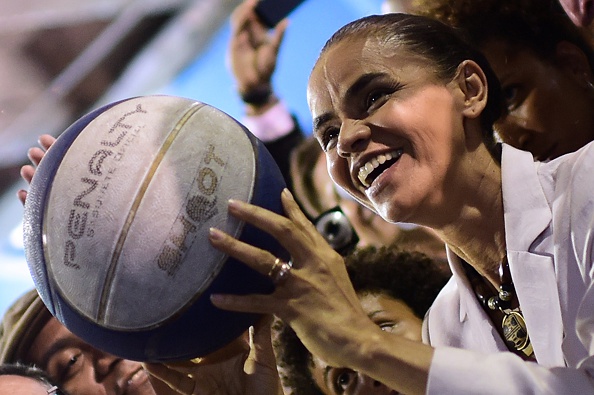 The presidential candidate of the Socialist Party of Brazil (PSB), Marina Silva, campaigns in Madureira, a surburb of Rio de Janeiro, Brazil, on September 25, 2014.

BRASILIA - Brazilian presidential candidate Marina Silva only learned to read at 16 and endured a tough childhood as a rubber tapper in the Amazon before considering whether to become a Catholic nun.

Instead, she became involved in politics, as a green campaigner, a senator and then a minister.

Socialist Party candidate Silva, neck-and-neck in the polls with incumbent and former Workers Party ally Dilma Rousseff, appears fragile with her small frame and hair always neatly in a bun.

But she is proving a feisty campaigner as she prepares for a first-round battle on October 5 and likely runoff three weeks later.

Silva, who served as environment minister under Lula for five years before quitting over policy disagreements, took up the baton for the Socialists only after the August 13 plane-crash death of presidential candidate Eduardo Campos, for whom she had been a running mate.

Born on February 8, 1958 in the poor Amazonian state of Acre bordering Peru, Silva was one of 11 siblings. She worked from the age of ten as a rubber tapper, and only learned to read at 16.

"There are two factors with Marina Silva," said Andre Cesar, with the political consulting firm Prospectiva.

"There&39;s the emotional side, after the death of Campos, and the rational side, garnering votes from those in the sizable undecided camp as well as evangelicals."

More than a decade ago, Silva converted to evangelism, joining the Assembly of God neo-Pentecostal church which counts 12.5 million members.

"You have to know that if Marina wins, Brazil will not backslide. Marina is open, cultured and a strong supporter of the lay state," despite conservative positions on issues such as abortion and gay marriage, said campaign representative Mauricio Rands.

Silva does oppose abortion, as do a majority of Brazilians, but says she would hold a referendum on the issue and respect the result.

A mother of four, the twice-married Silva remains opposed to liberalization of drug laws as well as stem cell research and gay marriage.

Silva is bent on becoming Brazil&39;s first black president in a country where a narrow majority of the 200 million population is black or of mixed race.

Some observers have nicknamed her "Lula in a skirt," comparing her rise to prominence with that of the two-term former president -- who is backing Rousseff in the election.

Battling hepatitis in her teens, Marina left her home village. She eventually entered a convent but then discovered Liberation Theology --the belief that faith should be used to help the poor by encouraging their participation in political life.

That moved her to become active in union business and green campaigning as she joined the struggle of "seringueiros" (rubber tappers) fighting Amazonian deforestation.

Along the way, she obtained a university diploma in history.

She was elected to office as a PT-affiliated Rio Branco council member, then in 1994 at the age of 36, became the youngest senator in Brazilian history.

After Lula took power in 2003, he made Silva environment minister and she set about reducing deforestation in Amazonia.

But in 2009, she quit the party, seeing strong economic growth as based on the destruction of natural resources.

Switching to the Green ticket for the 2010 election, she placed third with a 20 percent vote share as Rousseff, whom she now looks to oust, succeeded Lula.