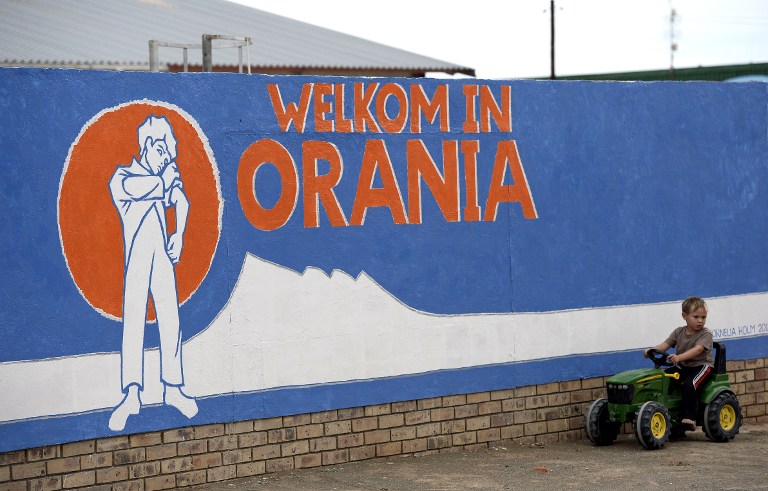 A young South African Afrikaner boy plays by a painted wall reading "Welcome in Orania" in Afrikaans on April 17, 2013 in Orania.

ORANIA - Welcome to Orania, South Africa, a whites-only enclave established in 1991 during the dying years of apartheid.

The town in the sparsely populated Karoo region is inhabited only by Afrikaners.

These descendants of Dutch-speaking migrants who arrived in South Africa in 1652 with Jan van Riebeeck, now make up 6% of the "Rainbow Nation&39;s" population.

It was the Afrikaners who formed the backbone of the National Party that introduced apartheid, and many South Africans regard Orania&39;s residents as little more than latter-day bittereinders, term used for Boer War holdouts, who rage against today&39;s majority rule.

But residents maintain the town is not racist.

They argue that Orania is the best way of preserving Afrikaner culture and language and offers a safe sanctuary from crime-ridden neighbourhoods.

"We are safe here," said resident Kobus Jonck. "We do not worry about locking our cars at night, even the (house) doors... they are never locked."

Its easy to see why some may find the setting idyllic.

The town is built on the 8,000 hectares (19,768 acres) of a private farm, along the Orange River, in the beautifully desolate Northern Cape province.

There are no high-rise buildings or factories. Children run barefoot between small prefabricated homes.

According to the town&39;s authorities, its modest population of 1,000 is growing at 9% a year.

Jonck, a sheep farmer, settled in Orania in 2012 with his family only after going through an interview process with the town committee.

"When new people come to Orania, they are interviewed by a group of people to make sure that they have sufficient understanding of what the town is about," said Carel Boshoff IV, the son of the late founder of the town, Carel Boshoff III.

Its leaders have dreams of turning it into an independent state for the Afrikaner minority, who today number three million.

In line with the town&39;s motto of "working for freedom", residents are encouraged to be self-sufficient, and the majority are farmers or traders.

They all work to grow and develop the town and labour is provided by the townspeople, as little as possible comes from the outside.

Like any other town, Orania is run by a council which is elected on an annual basis, according to Mayor Harry Theron.

It boasts shops, schools and its own flag and currency, the ora, which is pegged to South Africa&39;s rand.

But unlike other towns, blacks are not welcome.

At the entrance of the town, a statue of Hendrik Verwoerd, the architect of apartheid, stands proudly among other prominent icons of the old South Africa.

The town&39;s flag with blue, white and orange colours similar to the old apartheid flag is visible everywhere across this microstate in the making.

The legislation was adopted after the end of apartheid, following years of fighting against the system of separate homelands for native blacks.

"This republic is growing," proclaimed Quintin Diederichs, a former rugby player who became a resident three years ago.

"We have fifty companies that we have created with our own hands," said Diederichs.

But beneath the seemingly safe and secure environment lurks paranoia, some residents believe that one day blacks might turn against them.

A waiter at a bar said that he fears "black South Africans will kill all white people" when peace icon Nelson Mandela dies.

The 94-year-old who was jailed by the apartheid regime became the country&39;s first black president in 1994.

Upon his release from prison in 1990 he preached reconciliation and non-racialism.

Orania is probably not what the revered statesman envisaged for a new South Africa.