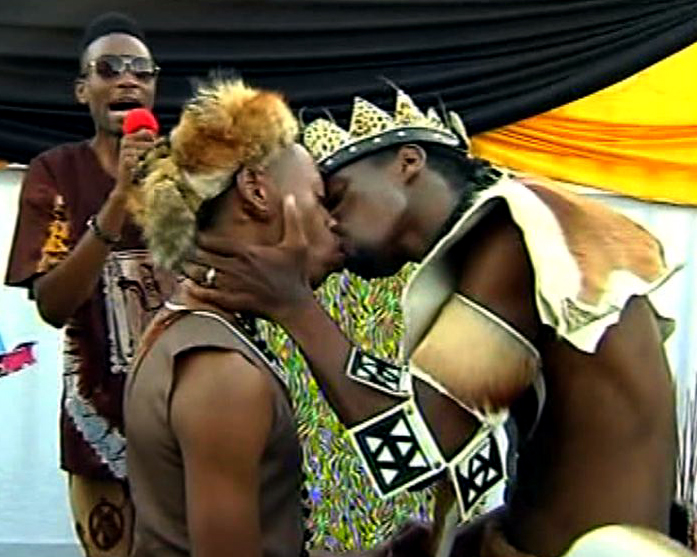 The young African gay couple's kiss that set tounges wagging around the globe.

KWAZULU-NATAL - The union that has caused much stir among African cultural experts went ahead without a glitch in KwaDukuza yesterday.

The young gay couple were saying their “I do” the African traditional way.

The first African traditional gay wedding was received with ululations all round as the men of the moment Thoba Sithole and Cameron Modisane made their grand entrance.

Both were dressed in traditional regalia to show their Zulu and Setswana roots.

There has been a lot of criticism against Sithole and Modisane tying the knot, but the grooms say they&39;re proud to be making history.

A jovial Modisane said, "I&39;m so happy to be married to Thoba. I love him so much, we are both Mr TC Sithole Modisane now. It&39;s very exciting (that) we are making history. I think like I&39;ve said before it (the marriage) is against this idea that being gay is unAfrican. Being gay is as African as being black so we are proud of our culture. Thoba is Zulu and I&39;m Tswana and we are rooted in our culture."

Keeping with tradition, the grooms’ families exchanged gifts and slaughtered a cow to introduce themselves to their respective ancestors and seek blessings.
This also formalised their three-year relationship.

Thoba’s mother Lindiwe Dladla said, "I&39;m so happy, I have no worries and I&39;m so grateful for the gifts from the Modisanes. I wish them well for the future and where they will be living together."

"I&39;m also one of the people, like them, who&39;s gotten married. I&39;m happy that they did something different, unlike us who like more Western ceremonies. This was beautiful, just beautiful."