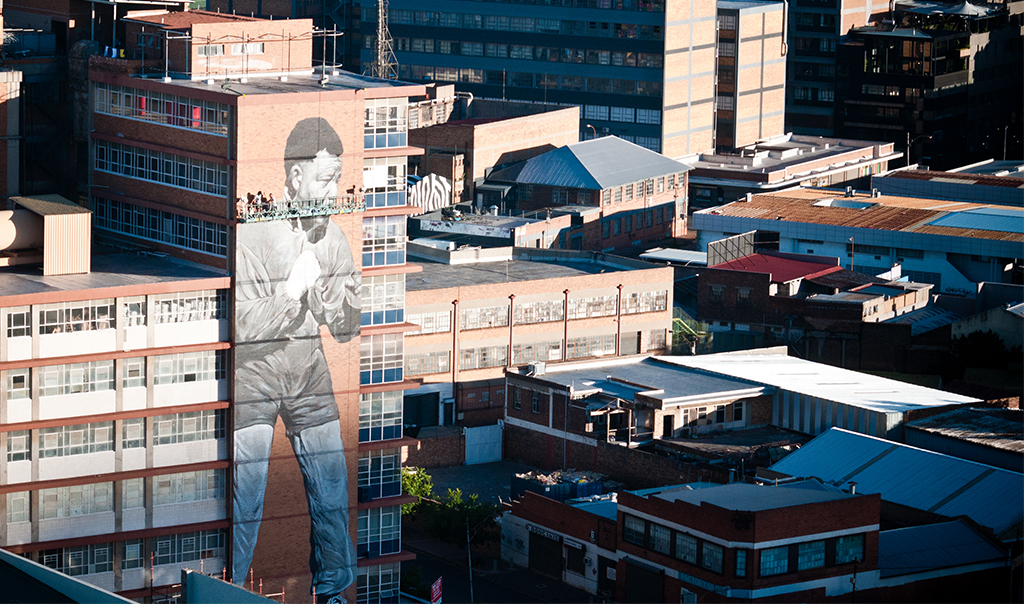 What better way to celebrate the gigantic life of former president Nelson Mandela than with a 40-metre tall mural of the boxing enthusiast that he was.
Artist Ricky Lee Gordon or otherwise Freddy Sam, took on the challenge proposed by property developer Jonathan Liebmann to paint the huge mural on a newly purchased building in the Maboneng District just east of Johannesburg with just, “Three days to prepare and four days to paint,” says Gordon.
Project coordinator Bheki Dube says the image of Mandela, taken from an original photograph by Bob Gosani, is very close to and faces the direction in which the photograph was taken. The use of the image had been arranged with the Bailey African History Archive (BAHA) and the artist’s family according to Dube.
The mural was worked on the same weekend as when Mandela’s official funeral took place in his home village of Qunu and completed on Monday, the day of reconciliation.
The text of the mural, although not visible in the visuals here, will read “I AM BECAUSE WE ARE”, inspired by the definition of Ubuntu: a philosophy highlighting togetherness and humanity. Gordon explains, “Nelson Mandela taught us that we cannot be human by ourselves. This is a constant theme in all my work”.
As the development of the Maboneng Precinct continues next year, Liebmann hopes the mural will inspire the entire community to live with the embodiment of the values of who he believes to be the world’s greatest leader. “As we continue to transform the built environment, it is our hope that we will see many other people jump on board to be part of positive change in Johannesburg”.
With the reach of the tallest mural in the city, Gordon hopes that the mural will be experienced by and communicate with people from all walks of life. “I believe that creativity is part of the change. My intent is to inspire, through art”.
The piece can be seen driving on the M2 highway going east as well as on Joe Slovo, peeking over the shorter buildings. The mural is situated on the corner of Staib Street and Beacon Road just east of the Johannesburg CBD.
Additional video editing by Bianca Bothma.