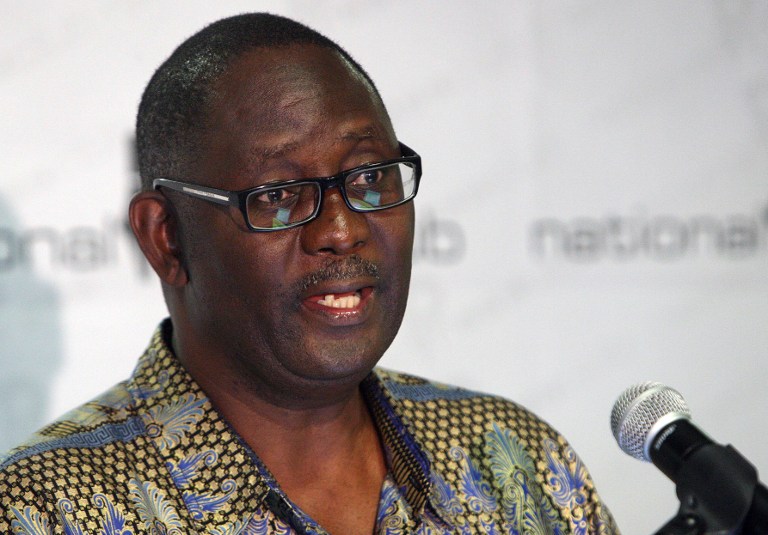 Cosatu general-secretary Zwelimzima Vavi (pictured) has called on the ANC to work with others to try to solve the country's problems.

Lately Zwelinzima Vavi must feel like he&39;s been screaming into the wind.

His efforts against government&39;s e-tolling plans, corruption and his push for more worker-friendly economic policies are falling on deaf ears.

Someone has decided Vavi must vacate the office of the Cosatu general secretary and some union bosses, acting without a mandate from their unions, have been leading the charge. Although there has not been a shred of evidence against Vavi to date, power struggles have paralised Cosatu.

Under sustained attack, Vavi has turned to workers for salvation.

He believes the real game plan is to destroy Cosatu, render it a puppet to the ANC and has made it clear he’s not going down without a fight.

I first interviewed Vavi six years ago. The only time he has ever broken eye contact with me in an interview came last year. In a sit-down before Cosatu&39;s national congress I asked him if he was scared of following in the footsteps of his predecessors ( Mbhazima Shilowa and Cyril Ramaphosa among them). Vavi paused, looked at a blank wall, sunk into his chair a little bit.... holding his breath, he answered with one word..... "Yes".

Through the eyes of one Cosatu member, who attended the union federation&39;s inaugural conference in 1985 and every one since, Vavi is someone who has unapologetically fought for worker issues. That unionist reminds me that Vavi has been there from the start of Cosatu&39;s efforts to force the then apartheid government to recognize workers and free political political prisoners.

That is the shop floor support Vavi is relying on, as well as people like HIV/AIDS activist Zackie Achmat.

Achmat has refused to abandon his old comrade, who stood by him as he took on  government over Aids denialism. Achmat has little to lose but many of Vavi&39;s other comrades have seemingly everything to gain, like cabinet positions or lucrative state appointments, and delivering Vavi&39;s scalp would increase their worth.

Vavi cannot claim though to have avoided getting his own hands dirty. He had a big part in the fall of former president Thabo Mbeki and the once-powerful Cosatu president named Willie Madisha.

Speaking to government, ANC and union leaders this week, it surprised me how many Vavi has managed to alienate. One government minister remarked Vavi&39;s "failure to see opportunity as well as danger" had cost him. A union boss said power got to Vavi&39;s head, "Vavi is about Vavi". And an ANC leader asked me if I had noticed that the very same "white liberals" who Vavi had won favour with over his stance on e-tolls and against the proposed Protection of State Information Bill had "not come to his defense".

Ramaphosa is the only ANC leader who has come out to take a principled stand. In an interview I did with him earlier this year, Ramaphosa did not seem to buy the allegations against Vavi and said he was disturbed by divisions within Cosatu and reminded the labour federation that it could only achieve its goals if it was united.

Vavi&39;s critique of the National Development Plan has reminded many I spoke to of Ramaphosa&39;s speech to Cosatu&39;s 1988 conference at Wits University, which called on Cosatu to adopt the Freedom Charter. While Ramaphosa chose to serve as an ANC leader, Vavi has always advocated that an independent trade union movement best serves workers.

Vavi acknowledges its going to be difficult for Cosatu leaders to campaign for the ANC in next year&39;s general election because of the failure to deliver on the ANC&39;s 2009 election promise of decent work. He says workers are not "fools", that "decent work and labour brokering are like oil and water" and the National Development Plan replaces the Freedom Charter. He adds that unless the ANC settles these matters they are going to look like "unprincipled liars" and "POP-I&39;s" in front of the electorate.

ANC Secretary General Gwede Mantashe said that while the ruling party will consider Cosatu&39;s suggestions, the ANC was not an extension of Cosatu.   "Don&39;t expect us to be shop stewards,"  Mantashe  said at Cosatu&39;s Bargaining conference last month.

Shocking from someone who was mining union NUM&39;s general secretary not too long ago; but indicative of how little the ANC seems to respect Cosatu today.

It makes it clear that Cosatu is not the Cosatu of yesteryear. While Cosatu&39;s mission statement in 1985 puts the anti apartheid struggle at the core of Cosatu&39;s goals,  the union federation&39;s founding general secretary Jay Naidoo said back then,  that Cosatu was first and foremost a workers organization. That statement was given meaning by the respect big business and the National Party were eventually forced to show Cosatu. Bringing the economy to its knees forced the apartheid government to give into many of Cosatu&39;s demands.

Many of the union leaders say the ANC appreciated Cosatu much more back then. They explained Cosatu was a clear friend of the ANC and business was seen as an enemy. Cosatu leveraged that to get worker friendly labour laws and rights of workers guaranteed in Constitution. Ramaphosa and Naidoo seemingly accepted nothing less from the ANC.

The economic reforms Vavi is pushing for come from Brazil&39;s success. But the Brazilian experience suggests worker friendly economic policies came about only after workers in that country forced respect from the country&39;s political and business leaders. Mass stayaways for up to 41days, the occupation of factory floors, and even violent face-offs with the country&39;s army brought Brazil to its knees.

Cosatu&39;s failure to lead workers during the recent mineworkers strike shows a lack of appetite to take the fight to business and the ANC government. Vavi too was chased away when he did eventually head to the front line.

At NUMSA&39;s national bargaining conference this week, the metalworkers unions general secretary Irvin Jim said that after Marikana, worker expectations were high. NUMSA president Cedric Gina said after the unrest in the mining and agricultural sector, (and the gains workers made there) wage negotiations would never be the same. According to union insiders record wage demands are being made at the shop floor in the private and public sector this year.

Cosatu&39;s members  also made it clear in internal surveys that they want leaders to pay attention to their anger and disappointment.

Where has the social activism gone to in our country? Has it also submerged below the morass of that the bureaucratic development industry breeds? You cannot escape your responsibility any longer – our society is fragmenting and our state becoming increasingly dysfunctional.

So if all that is true, where do the leaders and union bosses find the time to stab each other in the back? Surely running a union, Cosatu and the country are full time jobs.

Even Planning Minister Trevor Manuel, who has long argued that South Africa&39;s political stability was threatened by high unemployment, inequality and poverty, should be concerned about the state of Cosatu. He was privy to how badly it backfired when the then-apartheid government tried to remove Cosatu&39;s legitimately elected leaders from the equation in the late 1980&39;s.

All ANC and Cosatu leaders want South Africa&39;s unemployment rate to be halved by 2020.

But instead of the focussing on getting to the 10 percent growth rate required to achieve that (we currently sitting on around 2.5%) the country&39;s political and union leaders are too busy concerning themselves with internal power struggles.

Talk in the corridors suggests some of those who helped get Malema booted out of the ANC and secure a eighty percent victory for President Zuma at the ANC&39;s national conference in December are behind the campaign against Vavi....

Some of them are hedging their bets, against Vavi.

As he faces political oblivion, Vavi is relying on the workers that he has served for three decades to come to his defense.