Bafana Bafana bow out of African Cup of Nations 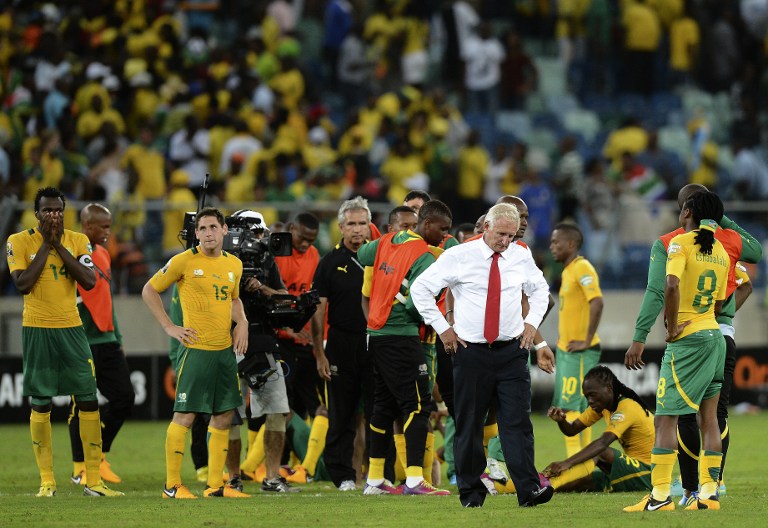 South Africa's coach Gordon Igesund reacts at the end of the penalty shootout of the African Cup of Nation 2013 quarter final football match South-Africa vs Mali.

Mali again showed incredible resilience to come from behind and knock the host team out of the African Cup of Nations in a penalty shootout for the second straight year, joining Ghana in the semifinals on Saturday.

The Malians came from 1-0 down to level and then oust South Africa in their quarterfinal after a shootout, repeating the come-from-behind victory from last year when they surged past co-host Gabon and another partisan home crowd to make the last four.

Sports Minister Fikile Mbalula praised Bafana Bafana for a well spirited and bitter fight during the Afcon game at the Moses Mabhida stadium in Durban.
"Our team fought hard and dominated but as a nation we understood that there could only be one winner," he said.
"For us, South Africa has already won by being the best of this successful tournament. We wish Mali and all the other teams well in their endeavour to lift the Afcon 2013 trophy on February 10."
He said it was the best Afcon tournament ever hosted in the country.
Bafana Bafana coach Gordon Igesund refused to be too downbeat despite the loss.
Dean Furman and May Mahlangu both had their spot kicks blocked by Eagles goalkeeper Soumbeila Diakite, while Lehlohonolo Majoro shot wide after the match had ended 1-1 after extra time.
Only Siphiwe Tshabalala was successful with his penalty, with Cheick Diabate, Adama Tamboura and Mahamane Traore scoring for the visitors as the capacity 50,000 crowd at the Moses Mabhida Stadium was stunned into silence.
"It&39;s obviously disappointing but we lost today with pride, dignity and with passion," the coach said afterwards.
"It was a very tough game for both teams, but I must say that my players gave everything.
"We played one of the best games we have for a while. You don&39;t want to lose a game when you play that well.
"It&39;s just unfortunate there had to be a loser today and that happened to be us."
The hosts, who were playing in the knockout stages of the continental showpiece for the first time in 11 years, dominated for most parts of the game.
Igesund, who also thanked the country for their support, was also pleased with how his tenure as South Africa coach was shaping up.
"I got the players from 1 July when I was employed and then we had maybe 30 days with the team together and I think they&39;ve come a long, long way since then.
The finals of the Afcon tournament will be played at the National Stadium in Johannesburg on February 10.