Sithole sets sights on his next challenge 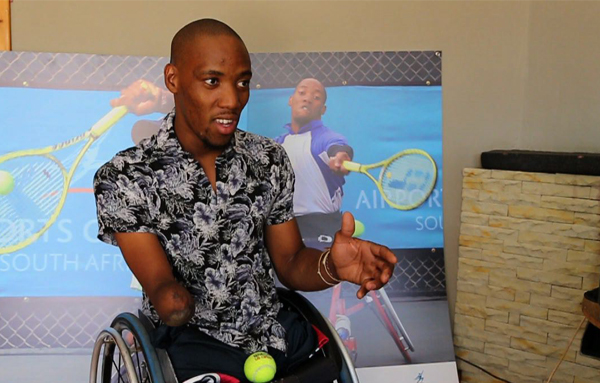 Triple-amputee Lucas Sithole is now setting his sights on victory at the NEC Wheelchair Tennis Masters.

JOHANNESBURG - Fresh from the success of his US Open tennis tournament victory this month, triple-amputee Lucas Sithole is now setting his sights on victory at the NEC Wheelchair Tennis Masters & ITF Wheelchair Doubles Masters later this year.

But Sithole is by no means resting on his laurels and aims to commence training for the masters from next week, as part of his buildup to the Rio 2016 Paralympic Games.

It’s not been all plain sailing since his US Open win, which was not only his highest sporting achievement to date but also catapulted the world No 2 into the limelight as he became the first African to clinch a US Open singles title in any format of the game

As such Sithole has become an increasingly inspirational figure both on and off the court, recognition he is grateful for but which also has its challenges.

“People want me to be their inspiration and I find it difficult to deal with that and because they have a lot of expectations and tutoring and so on I don’t like to focus on that part because I still need to build up my game to be at a more high level,” he said.

Sithole admits that he has helped to raise the profile of disabled tennis in South Africa but feels there is still work to be done, particularly in light of the fresh talent that is beginning to rise through the ranks.

“I think the winning of the US Open was a surprise to a lot of people because [two years ago] no one knew who [I was],” he said.

“I think in that way it shows that disabled sport is not on the same level as able-bodied sport. So maybe if government can try to balance the two sports to be equal then we’re not going to be having these problems.

Currently recovering from a minor shoulder ailment, Sithole is aiming to supplement his already powerful forehand with an improved serve and more effective forehand.

“I need to look at my serve and my forehand and then I’ll be dominating. Most of the time when I use my backhand it’s always a winner. If I can improve on my forehand, then if you give me a slow ball then I can just punch it, the same as a backhand.”

Sithole is due to compete at the NEC Wheelchair Tennis Masters & ITF Wheelchair Doubles Masters in November where he is likely to face old adversary and current quad tournament champion Wagner once again.

But having mustered the necessary composure to defeat the world No 1 on his own turf at the US Open, the pride of South African wheelchair tennis is in good stead to return home with more silverware.