Parliament gets tech savvy with an app 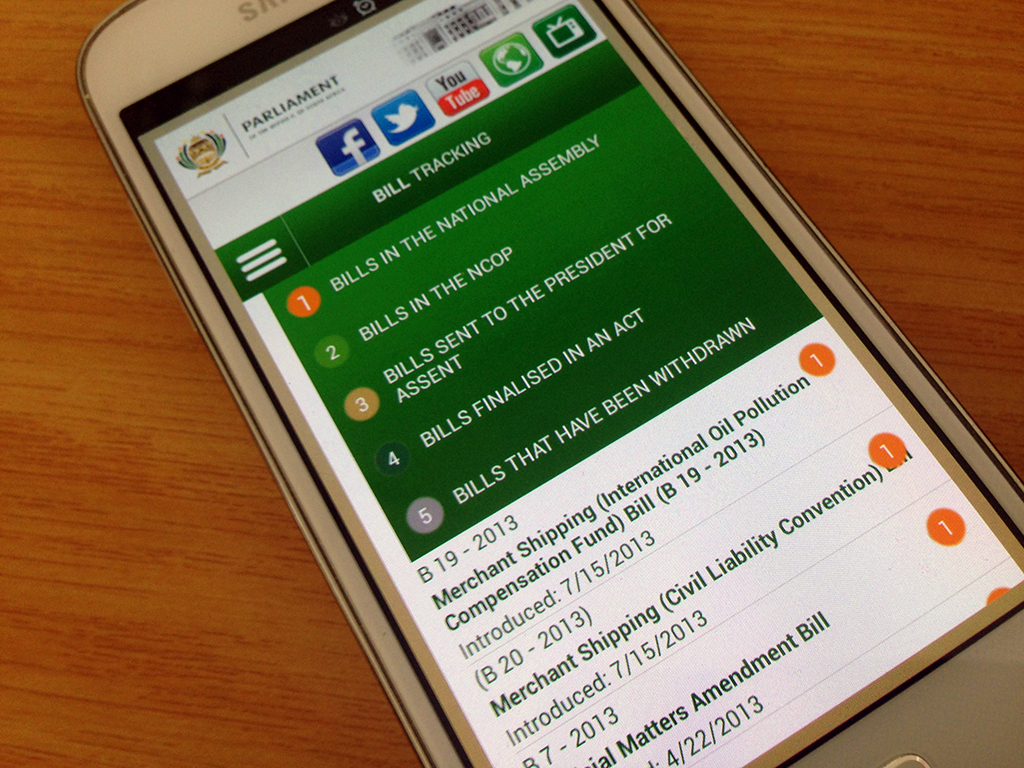 October 12 - Parliament has created a phone and tablet application to allow South Africans to keep track of legislation and events in Parliament.

JOHANNESBURG – This week conservative Members of Parliament booted a member of the public for showing up in shorts, exposing his tattoos.

However, not everything about parliament is old school.

The legislative arm of government has recently launched a cellphone and tablet application.

The app, which can be downloaded in seconds, is available for Android and Apple devices.

Out with the old

According to Parliament spokeswoman Estelle Randall, the app was designed as part of Parliament’s strategy to move away from publishing important notices in hard-copy.

Randall said the project was aimed at making parliamentary papers available electronically to members of parliament and the public.

Parliament wants to “develop digital publishing as the main publishing medium” with the hope of bringing down publishing cost “while increasing availability and ease of use”, Randall said.

The application enables MPs or ordinary citizens to keep up-to-date with issues being debated.  Among the daily papers are the announcements, tablings and committee reports (ATCs) which provide information on the outcomes of committee meetings and the tabling of new legislation.

The app also provides access to the national assembly programme, minutes and internal questions and answers.

“The application design was based on the new design approved for the Parliament website and mobi-site, to keep a consistent look and feel across platforms. The aim was to present the information in as user-friendly a manner as possible and in a form that is easy to navigate,” Randall said.

Another interesting feature is the “bill tracking” tab, which provides information on when a bill was introduced to parliament, which bills have been withdrawn and which have been sent to the President for assent.

“The Bill Tracking feature allows users to view the status of Bills and the content of a Bill itself. People who want to comment on Bills can do this by using the link provided on the application that directs the user to Parliament’s Facebook and Twitter pages,” Randall said.

“We’re hoping that everyone who has access to the technology will use this app to get information about our Parliament,” Randall said.

While the app is free to download via the Play and iStores, it cost Parliament R332,880 to develop. The design and implementation process took only a few months, from February to August this year.

Randall says more features could be added in future, including forthcoming events, debates in both houses and magazines published by Parliament.