10 things you need to know from ANCNGC 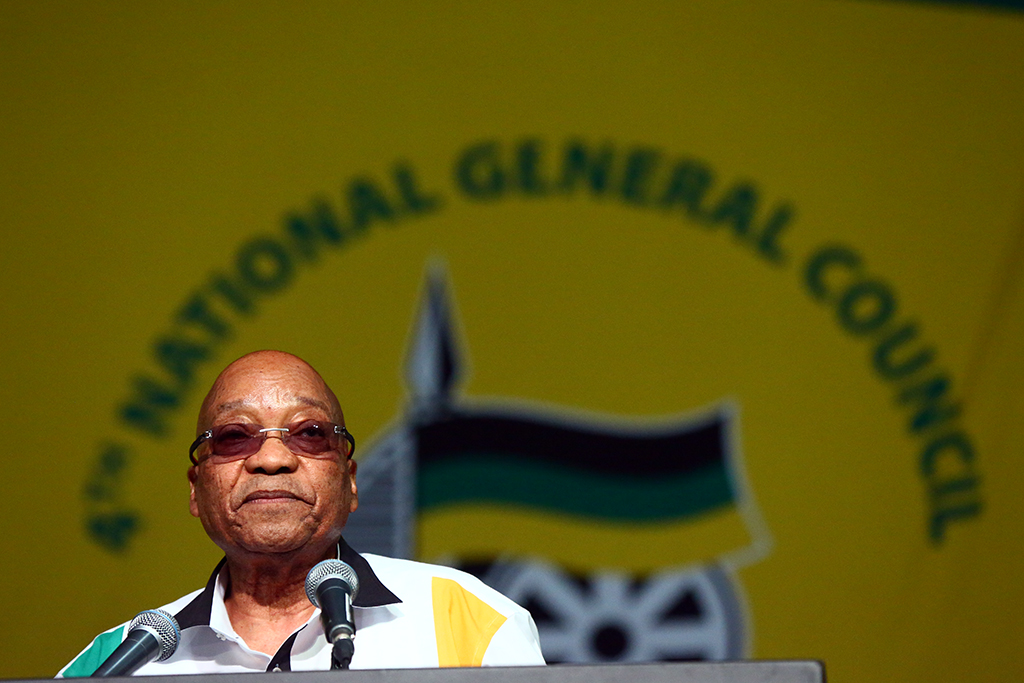 ANC president Jacob Zuma is seen on stage at the party's national general council held in Midrand over the weekend.

MIDRAND - The African National Congress (ANC) spent the weekend on a mid-term review of its policies.

The National General Council passed resolutions on many issues including housing, education, health, international relations, the economy and elections.

Below is a summary of what you need to know about the ruling party’s resolutions:

President Jacob Zuma will not run for a third term. There had been speculation that the fourth president of South Africa would run for a third term, but speaking to the Mail & Guardian on the sidelines of the NGC, he said he would “never ever” stand again for presidency.

Zuma is in his second term as both party and national president. His second term as ANC leader ends in 2017, but he will remain President of South Africa until 2019 - two years after he ceases being the ANC&39;s political head.

2. The premier league “does not exist, it is fiction”

According to ANC chairperson Ace Magashule, the so-called premier league does not exist in the party.  Speaking to eNCA at the NGC he said,  "I don’t know how we can influence the entire country when ANC delegates and ANC members are individuals in their own right. They are credible, they can think for themselves and I don’t understand how they can be influenced by a group of three people.”

His colleague ANC North West chairman, Supra Mahumapelo, agreed with him saying “There are mischievous people, there are people who bring their own agendas in the ANC and they like labelling people..”

The pair along with Mpumalanga ANC chairperson David Mabuza have been reported to have been pulling strings behind the scenes to serve their agenda including securing a win for Bathabile Dlamini as ANC Women’s League president and Collin Maine as ANC Youth League president.

ANC President Jacob Zuma, while delivering his political report on the first day on the NGC, announced that membership has dropped by more than 400,000 between the 2012 party conference and the general council.

4. “Negative tendencies in the ANC”

The ANC attributed the dipping numbers to negative tendencies in the party. In his opening speech Zuma said “systematic sowing of divisions” within the organisation was crippling the party.

“Most ANC branches are facing difficulties and need to be freed from tendencies such as manipulation, gate-keeping or the bulk buying of membership,” Zuma said.

He also said some form of gatekeeping was blocking branches from growing bigger than the mandated 100 members per branch.

Head of elections and campaigns Nomvula Mokonyane reiterated the president’s words saying some people are being prevented from working within the party – with issues such as disappearing membership forms and dodgy audit reports plaguing the organisation.

5. The integrity commission will make decisions, not recommendations.

Head of elections Nomvula Mokonyane, while presenting the organizational renewal commission report, said the party’s integrity commission will have authority to decide the fate of members.

The party said the commission will not only deal with criminal matters but also members&39; conduct, among other things, and will make disciplinary rulings.

“That must be granted with an understanding that any issue against any member must be thoroughly investigated and members and structures of the ANC must guard against this particular noble idea being abused for political reasons,” said Mokonyane.

Mokonyane also said the new powers of the commission are expected to avoid situations where members approach the courts on party matters.

6. Targeting metros ahead of elections

The party said it will now elect mayoral candidates before the 2016 local government elections. This, it says, so they can be the face of campaigns in communities they work in.

The ANC wants to target metros, with Cape Town topping the list, ahead of the elections.

“ANC needs to win back our traditional supporters who are dissatisfied with us ahead of elections,” said Zuma.

He told thousands of members gathered at Gallagher Estate that winning back support  begins at branch level, which is the “basic unit of the party and most important of the movement.”

7.  ANC wants South Africa out of the ICC

The ANC has called for the South African government to reconsider its membership of the International Criminal Court (ICC).

It has been a hot topic in government and the party since Sudanese President Omar al-Bashir arrived in the country in June for the African Union summit - he is wanted by the ICC for alleged war crimes in the Darfur region.

Government came under fire during the visit when Bashir was allowed to leave the country despite a North Gauteng High Court order forbidding it.

The party believes powerful countries who are not signatories are able to make decisions with far-reaching consequences and that military regime changes, including the one in Libya, have not brought about sustainable peace.

“The ANC disagrees with the double standards and selective actions of the International Criminal Court. In this regard, the NGC has recommended that government reviews South Africa’s membership of the ICC,” said Zuma.

The peace and security commission of the ANC raised concerns of a “mushrooming” private security industry.

“We have observed that they are well equipped, well armed, have high calibre weapons way beyond what police in South Africa have. You can’t have a private security industry which is way better equipped than police in a country,” said chairperson of the sub-committee peace and security Nosiviwe Mapisa-Nqakula.

These security companies, according to Mapisa-Nqakula, are based overseas and employ undocumented people.

In recent years, the country has seen a surge in protests at higher education institutions over funding.

Although the higher education department has pumped billions into the National Student Financial Aid Scheme (NSFAS) it appears supply is not meeting demand.

At the Polokwane conference in 2007 it was resolved that there must be an expansion of free higher education, particularly for poor students, but university fees are now proving to be an obstacle.

“Commission expressed concern the significant growth in the levels of fees in our university sector and it was agreed the higher education department must look at regulatory frame work for curbing this massive growth of fee levels in the higher education sector,” said NEC member Naledi Pandor.

The National General Council has resolved that the Annual National Assessments (ANA) of pupils will go ahead.

The Basic Education department has been caught up in a bitter battle with the country’s biggest teacher union – South African Democratic Teachers’ Union (Sadtu) over the ANAs.

The union has said that it was concerned that the tests were being employed as a tool "to terrorise, demoralise and demotivate teachers, instead of a proper intensive teacher training programme."

But the ANC NGC is not backing down – defiant in the decision that grade one to nine pupils will sit for the assessments.