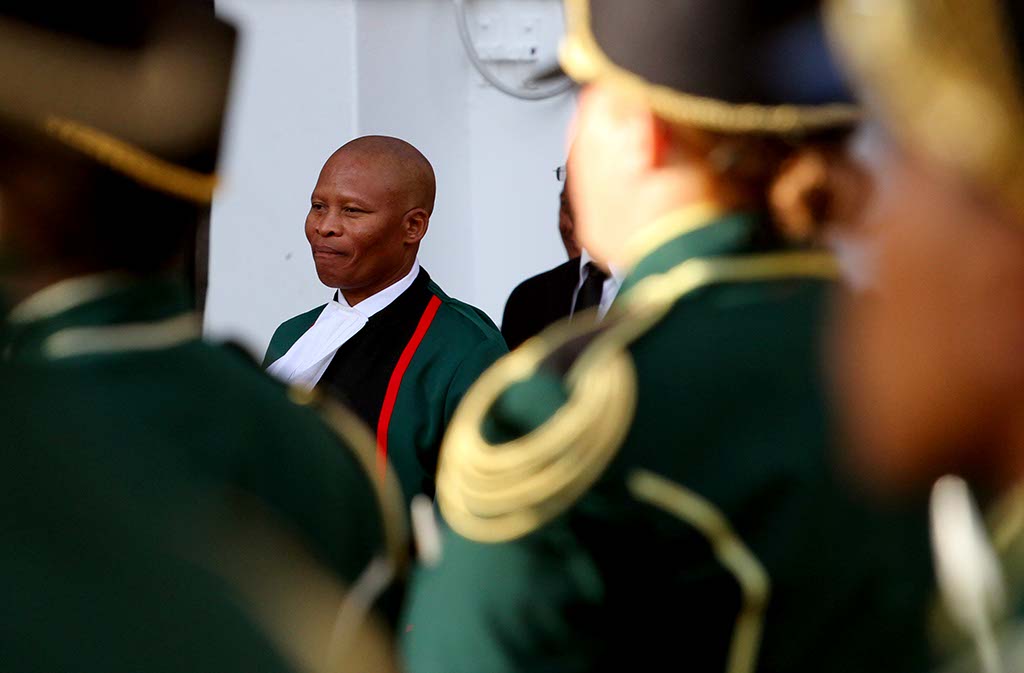 Chief Justice, Mogoeng Mogoeng, arrives at the opening of the 2013 State of the Nation Address at Parliament in Cape Town, South Africa.

JOHANNESBURG – The Constitutional Court has delivered a damning judgment against President Jacob Zuma and the National Assembly over their handling of the Nkandla report by the public protector.

Public Protector Thuli Madonsela, in her report, had found that Zuma should pay back the money spent on non-security features at his private home.

The ConCourt has thus ordered:

1. This court has exclusive jurisdiction to hear the application by the Economic Freedom Fighters.

2. The Democratic Alliance’s application for direct access is granted.

3.  The remedial action taken by the Public Protector against President Jacob Gedleyihlekisa Zuma in terms of section 182(1)(c) of the Constitution is binding.

5. The National Treasury must determine the reasonable costs of those measures implemented by the Department of Public Works at the president’s Nkandla homestead that do not relate to security, namely the visitors’ centre, the amphitheatre, the cattle kraal, the chicken run and the swimming pool only.

6. The National Treasury must determine a reasonable percentage of the costs of those measures which ought to be paid personally by the president.

7. The National Treasury must report back to this court on the outcome of its determination within 60 days of the date of this order.

8.  The president must personally pay the amount determined by the National Treasury in terms of paragraphs 5 and 6 above within 45 days of this court’s signification of its approval of the report.

9. The president must reprimand the ministers involved pursuant to paragraph 11.1.3 of the Public Protector’s remedial action.

10. The resolution passed by the National Assembly absolving the president from compliance with the remedial action taken by the Public Protector in terms of section 182(1)(c) of the Constitution is inconsistent with sections 42(3), 55(2)(a) and (b) and 181(3) of the Constitution, is invalid and is set aside.

11. The president, the minister of police and the National Assembly must pay costs of the applications including the costs of two counsel.

The State has been ordered to pay the costs of the application.

STATEMENT BY THE PRESIDENCY

President Jacob Zuma has noted and respects the judgment handed down by the Constitutional Court and its findings relating to the Public Protector&39;s report on Nkandla, the president’s homestead.

The president will reflect on the judgment and its implications on the state and government, and will in consultation with other impacted institutions of state determine the appropriate action.

The president and government remain confident that our constitutional democracy remains strong and intact and affirms the Chapter 9 institutions established to strengthen and support the country’s democracy.

Government will in due course communicate further on the matter.