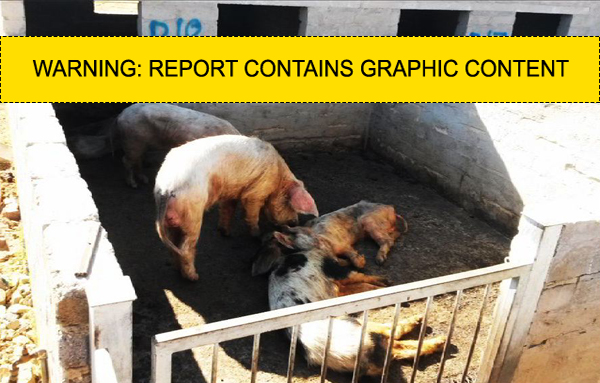 Scores of dead animals have been found on a Potchefstroom farm belonging to former North West premier and newly-elected National Council of Provinces chairperson, Thandi Modise.

JOHANNESBURG - Aside from being the year that South Africans were glued to their televisions watching the Oscar Pistorius trial, 2014 has also been a year of gruesome incidents of animal abuse and neglect.

From starving pigs eating each other to elephants being tortured, this year’s animal abuse stories have outraged many. The following list describes the ten most outrageous stories of animal abuse and neglect this year.

In February this year the carcasses of about 50 water birds were found in the areas surrounding Johannesburg’s Bruma lake.

The city’s municipality confirmed that the Escherichia coli (E. coli) level of outflowing water from the lake was 50 times higher than municipal standards permitted. This was blamed on a sewage spill caused by poor, overflowing sewerage pipes coming from the inner city.

A highly disturbing video of a man beating a goat in Mpumalanga in October this year went viral.

In the video Sipho Makamu (age 26) holds the goat between his legs and hits it repeatedly while the poor goat screams in pain and people laugh in the background.

He attacked the goat allegedly because it entered his property. He was later arrested and charged with animal cruelty.

Africa’s last polar bear, Wang, started 2014 off to a sad and lonely start after his partner GeeBee died the year before.

On Valentine’s Day in February, keepers at his Johannesburg zoo home spoilt him with some meaty treats and a fun hexagonal ball to play with.

Even though he enjoyed the treats, at this stage only a small percentage of his liver was still functioning.

He was put out of his misery in August and the zoo has decided not to replace the polar bears.

In the most recent bizarre animal story, a rare large serval cat was found dead in the Johannesburg CBD on 5 December.

On Heritage day in September, a heavily pregnant leopard was found caught in a snare in Magaliesberg. She was airlifted to Johannesburg zoo and treated by vets.

At least this story had a happy ending - her wounds from the trap were stitched up in a two-hour procedure.

In what is possibly the most bizarre story of 2014, the Tops Spar bottle store in Butterworth in the Eastern Cape decided to hold a “Win a live sheep competition.”

The sheep had its legs tied up and was left without food or water in an aisle of the store with a sign around its neck.

"A notice had been placed on the side of the animal stating that if customers purchase a bottle of two specific alcoholic drinks, they stand a chance of winning the animal," NSPCA inspector Andries Venter said in a statement.

4. Hundreds of reptiles (exotic pets) dead at OR Tambo

More than 1,000 reptiles and amphibians were rescued from an OR Tambo International Aiport cargo building in January.

The animals were discovered tied up in small bags or put into small plastic tubs, but none of them had been provided with water which caused extreme dehydration in the surviving animals.

The shipment, which included geckos, frogs, chameleons, skinks, lizards and toads, was taken to the Johannesburg Zoo for treatment and care.

In May the NSPCA released gruesome photographs of elephants allegedly being abused using the stretching method at Elephants of Eden, now known as Knysna elephant park.

On the last Thursday afternoon in July people reacted with shock at outrage on Twitter at photos of two giraffes being transported on the N1 in a trailer.

One of the giraffes knocked their heads against an overhanging bridge.

It later emerged that a third giraffe that was meant to be transported with the other two died during the capture process before it could even make it onto the trailer.

It was described as the worst case of farm cruelty ever witnessed by the SPCA’s Andries Venter, “Its horrific. We&39;re all at a loss for words."

Over 100 pigs, sheep, chickens and goats on the farm belonging to National Council of Provinces Chairperson Thandi Modise had been without water and food for a week, possibly two.

Piles of dead animals were found lying on the farm. The pigs that were still alive were starving and were euthanised because they started cannibalising the dead pigs and drinking their own urine.

Modise claimed that she wasn’t aware that the animals were being neglected and blamed her critics.

It later emerged that her farm workers were also not paid for months.