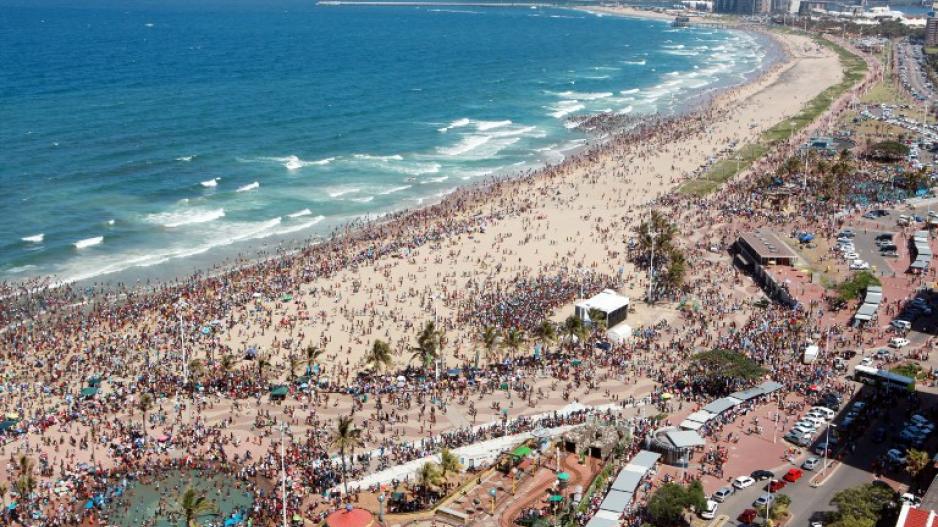 Several thousands of New Year party revellers and holidaymakers gather on the North Pier Beach and the swimming pool during New year festivities in Durban on January 1, 2012.

Municipal spokesman Mandla Nsele said: “With sunny weather conditions throughout the long-weekend, beaches were packed to capacity, as families and friends enjoyed the surf. Needless to say, lifeguards, law enforcement officers and other officials were kept on their toes and had to work hard to offer assistance where it was required and ensure that law and order was maintained.”

He said that “close to 800,000” visited the beaches from 30 December to 1 January. With Monday also being a scorcher of a day, it was not yet known how many people visited beaches, especially as many holiday makers started making the long trip back inland.

Nsele said that more than 500 people had to be treated for various ailments, mainly blue-bottle stings and cuts, while 186 rescues were carried out by the life guards.

A 34-year old man drowned at the city’s Mnini Beach on Saturday. The beach is not a bathing beach manned by life guards.

Ntsele urged people to only bathe at beaches manned by lifeguards and to heed the instructions of lifeguards.

There were 424 children who were separated from their parents and guardians, but most had been reunited with their parents.

At the time of writing there were still three children who had not been reunited with their parents.

There were 33 people arrested for various offences at the beach, including harassment, public drinking and theft.

“An estimated 306,430 tons of refuse was collected over the long weekend,” he said.