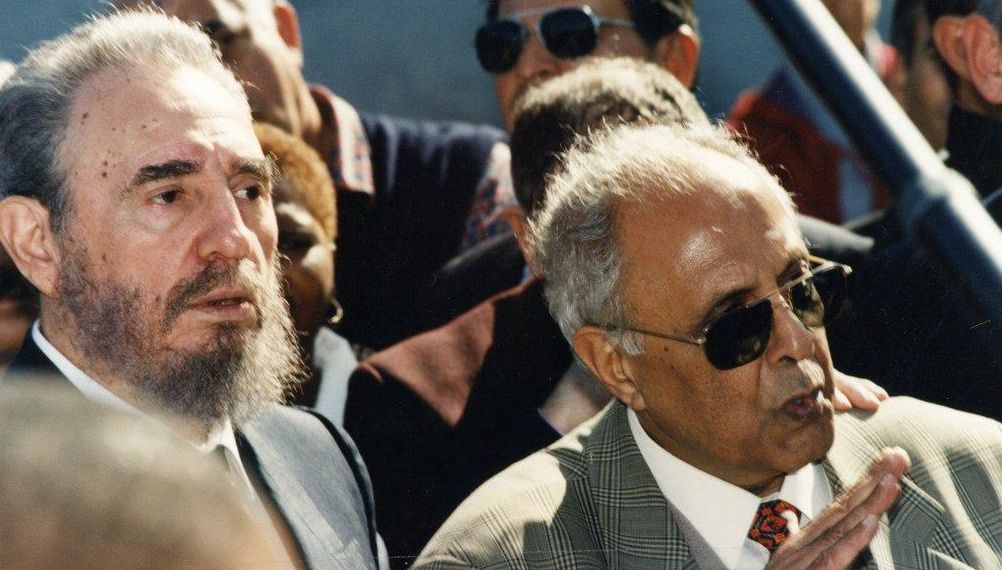 Ahmed Kathrada and Fidel Castro on a visit to Robben Island in 1998.

“History will always judge people differently based on who is writing it. For many in South Africa though, Castro has, and always will, symbolise anti-imperialism,” Kathrada said in a statement issued by the Ahmed Kathrada Foundation.

“His unwavering support for the freedom of South Africa and his stance against the apartheid regime will ensure that his name is recorded in our history books as one of the foremost international supporters of our liberation struggle.

“I had the opportunity of accompanying him to Robben Island in September 1998. I was struck by both his easy-going nature and the great interest he paid to the history of the prison. In later years I was reminded of the trip on two specific occasions- when Raul Castro and Barack Obama shook hands at the funeral of Fidel’s contemporary Nelson Mandela; and, when I accompanied the recently released Cuban Five on a similar tour of the island,” Kathrada said.

“Castro came from a generation of leaders who envisioned a more equitable society, based on mutual co-operation, especially between developing nations. His popularity in South Africa was undeniable. It was after all, Castro who received the loudest applause from the audience at the Union Buildings in 1994 as Mandela was sworn in as president. The only other world leader to have come close to receiving the welcome that Castro did was the Palestinian icon Yasser Arafat.”

It was not a surprise that Castro was held in such high esteem, not only by the South African public, but for many others across the African continent. Cuba supported many liberation organisations, often at the loss of Cuban lives. It was Cuba who intervened militarily against apartheid forces in Angola and Namibia. Cuba was also well-known for its medical internationalism as well as for hosting African students at its universities, Kathrada said.