All 8 Daveyton officers convicted for the murder of Mido Macia 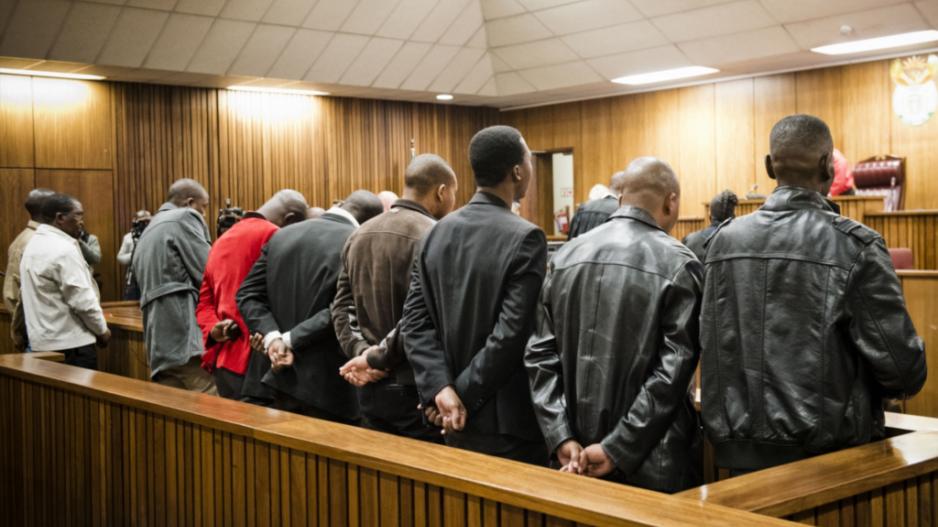 The nine police officers implicated in the death of Mozambican national Mido Macia appear at Pretoria High Court on July 27, 2015 in Pretoria. One has since been acquitted due to lack of evidence.

He then told the former police officers,"From now on you are all in custody."

Family members of the accused and Macia walked out of the court in a daze, while some hugged in the passage outside.

Judge Bam began reading the detailed and lengthy judgment at 9am, starting by going through the evidence of witnesses.

The details of how Macia had been dragged by a police van in February 2013 proved too much for some of his family to hear once more.

His sister sat sobbing quietly in court as Bam read the verdict.

The judge said Macia had sustained extensive soft tissue injuries and that "the blunt force injuries were severe."

He found that the police officers had lied to the court, and that their version of events had to be rejected.

"There can be no doubt that in being dragged, the deceased could have sustained serious injuries that could result in his death," he said.

He also found that Macia&39;s initial arrest - for a traffic violation - had been unlawful and that he was entitled to resist arrest.

When it came to the assault in the police cells, which the National Prosecuting Authority used to support the murder charge, Bam found that even though there was no eyewitness, evidence showed that the assault did take place.

Judge Bam also noted that key state witness, Warrant Officer, Mpumzi Ngamlana could be criminally liable for his conduct on the night of Macia&39;s death.

Ngamlana was on duty at the Daveyton police station and was in charge of the cells when Macia was brought in. He testified to seeing Macia brought in without any pants on and unable to walk.

Ngamlana had also testified to hearing Macia being assaulted.

“He was clearly not directly involved in the assault of the deceased and he had no motive. In his duty as the cell commander he had a duty to ensure that the deceased was not injured or assaulted," Judge Bam said.

The case is postponed for sentencing to September 22. All accused remanded in custody.

BREAKING: Accused one to eight are convicted of murder. MidoMacia

Two years on, police accused of MidoMacia murder are convicted. They are all now behind bars @eNCA pic.twitter.com/4Q9iuKeXb9