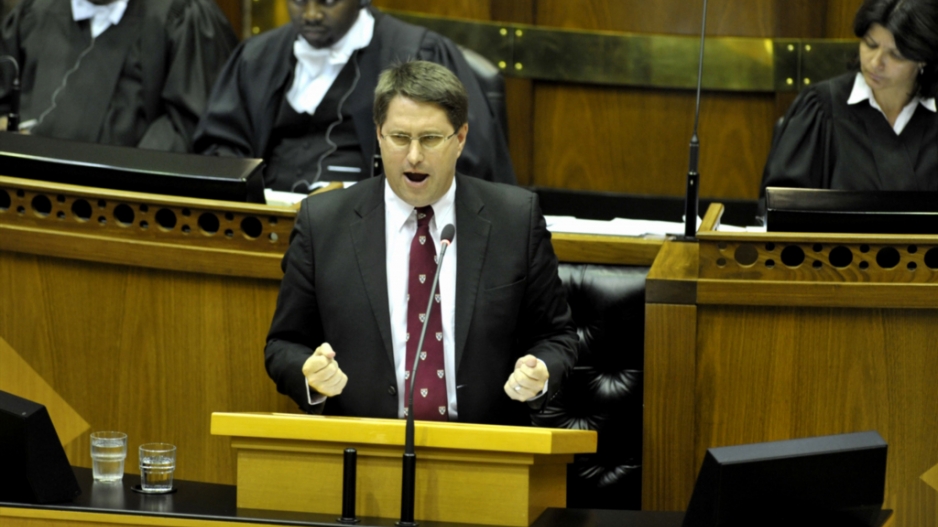 File. DA MP, David Maynier debates a motion of no confidence in President Jacob Zuma requested in writing by the Leader of the opposition on March 01, 2016 in Cape Town.

PARLIAMENT - In a moment of multi-party unity, MPs have agreed unanimously to pass the amended Fica Bill, which deals with laws designed to combat money laundering.

The legislation requires senior bank officials to approve the accounts of prominent, influential people and obliges banks to establish the source of funds, as well as monitor these accounts on a regular basis.

It's now up to President Jacob Zuma to sign it into law.

"It is now clear that a warrantless inspection is not permitted in respect of criminal offences. The requirements for consent to inspect without a warrant defer in the case of a private residence and unlicensed premises, an inspector needs internal authorisation before an inspection without a warrant," said Finance Committee Chair, Yunus Carrim.

Objections to the bill had also come from the Black Business Council and the Progressive Professionals Forum.

Treasury has warned, however, that if SA fails to implement the stricter control, finance costs will rise.

Opposition parties questioned Zuma's decision to send the bill back to Parliament last year, after having it for five months.

They'd earlier accused the ANC of wanting to use the bill to protect close associates.

DA MP, David Maynier said the bill will ensure that prominent people are subject to enhanced scrutiny by the banks.

“The Financial Intelligence Centre Amendment Bill is one of the most important legislative weapons in the fight against corruption in South Africa," said Maynier.

"At the heart of the bill is the Gupta clause, which ensures that domestic, prominent influential persons and family members and known close associates of domestic, prominent influential persons will be subject to enhanced scrutiny by financial institutions in South Africa, which includes obtaining senior management approval for establishing business relationships, taking reasonable measures to establish the source of wealth and source of funds of clients and conducting enhanced, ongoing monitoring of business relationships," he added.

"And that is why Jimmy Manyi and his merry band of bank bashers emerge from under a rock to so strongly oppose the Financial Intelligence Centre Amendment Bill.”

The Economic Freedom Fighters (EFF) has accused President Zuma of wanting to protect the Gupta family.

EFF Chief Whip, Floyd Shivambu said when the bill goes back to the president it must be signed into law immediately.

"What is the basis for him [President Zuma] bringing it back [to Parliament for the second time]?" questioned Shivambu.

"It's because the Guptas had said that bill must not be signed into law," he added.

READ: The Guptas will fall: Shivambu

The IFP's Mkhuleko Hlengwa said protecting the connected is the reason the bill was returned to Parliament. He said reviewing the bill was a waste of Parliament's time.

The bill will now be sent back to the president for approval, but there's not much time left.

"The International Finance Action Task Team has given us three months' grace to enact the amendment bill before we are declared non-compliant with anti-money laundering, tax evasion, anti-terrorist financing standards, which would place us in the same category as North Korea and Iran," said Cope MP, Deidre Carter.