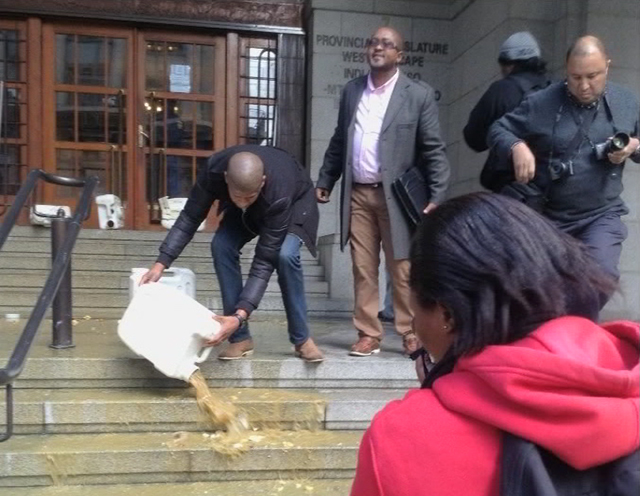 "Such behaviour is unacceptable and the ANC condemns it without reservation," spokesman Phillip Dexter said in a statement.

"This disgusting, pseudo-militancy is nothing more than anarchy, displaying a lack of any political or revolutionary consciousness or maturity."

Western Cape police said five people were arrested at the airport following the incident. They would appear in court once charged.

Acting airport spokeswoman Deborah Francis said the group apparently pretended to be passengers and carried plastic bags through to the domestic and international departures terminal around 1.30pm.

"It happened literally within a few split seconds... They threw it, jumped back into the cars and sped off," she said.

Police then caught them.

Dexter said it was alleged that some people in the group were African National Congress members.

"If that is so they have acted outside of any ANC mandate or structure and against the ANC&39;s policies, strategies and tactics. If any ANC member is found to be involved in this criminal behaviour, they will face the swift and appropriate disciplinary action of the organisation," he said.

They apparently also sang freedom songs which included a reference to Western Cape premier Helen Zille as a dog.

The group appeared in court, were released on warning, and told to return on August 2 after further investigation.

The State was unsuccessful in its bid to block bail for former councillor and ANC Youth League member Andile Lili, and Yandani Kulati and Thembela Mbanjwa.

At the start of the month, a group of people in Khayelitsha threw human waste at a bus and cars used for transport to a green economy event hosted by Zille.

A day before that, two men dumped faeces on the steps of the Western Cape legislature in a protest about portable flush toilets (PFTs). The men identified themselves to the Cape Argus newspaper at the time as Lili and ANC proportional councillor and youth league member Loyiso Nkohla.

The protests were linked to the apparent dissatisfaction by some people over sanitation in informal settlements and rolling out PFTs.