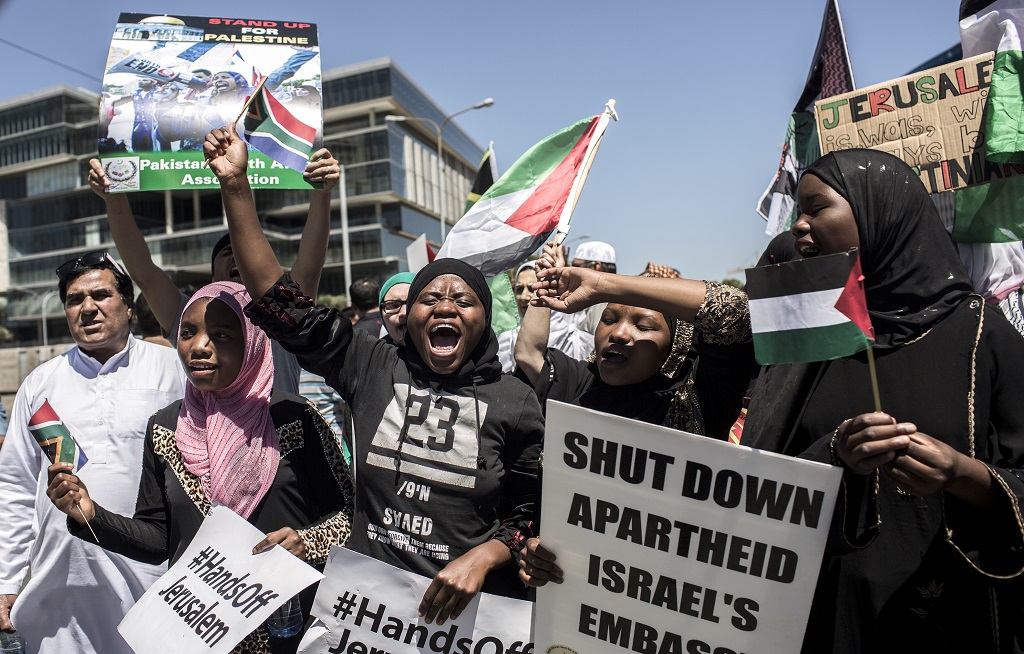 Members of pro-Palestinian groups, the Young Communist League, the Ahmed Kathrada Foundation, civil society groups and others demonstrate outside the US Consulate General in Sandton, Johannesburg, on December 14, 2017.

JOHANNESBURG – The ANC has recommended that the government should immediately and unconditionally downgrade the South African Embassy in Tel Aviv, Israel.

The final decision has been taken at the ANC’s National Conference, which is the highest decision making body of the party.

The statement reads, "In order to give our practical expression of support to the oppressed people of Palestine; the ANC has unanimously resolved to direct the SA government to immediately and unconditionally downgrade the South African Embassy in Israel to a Liaison Office."

“We concur with the PLO leader, General Jibril Rajoub, who was at our conference where explained that the downgrade of the SA Embassy in Israel will send a clear message to Israel that there is a price to pay for its human rights abuses and violations of international law.”

Trump&39;s move has been met with worldwide condemnation and has escalated tension between Israelis and Palestinians.

Trump reportedly informed President Mahmoud of Palestine about his intentions to move the embassy from Tel Aviv.

The ANC has since strongly condemned the decision by Trump to declare Jerusalem as the capital of Israel. Furthermore, the announcement, which was made on social media shows his lack of consideration in dealing with issues in the hostile region.

Israel considers Jerusalem its capital and wants all embassies based there.

But Palestinians want eastern Jerusalem to be the capital of an independent Palestinian state.

Several armed groups in the region have labelled Trump’s announcement as ‘a declaration of war’.

US President Donald Trump has threatened to cut off financial aid to countries that vote in favour of a draft UN resolution against his decision to recognise Jerusalem as Israel&39;s capital.

The UN General Assembly, which consists of 193 members, will hold a rare emergency session on Thursday at the request of Arab and Muslim countries.

Trump&39;s warning appeared to be mainly aimed at countries in Africa, Asia and Latin America who receive US financial aid.

“We don&39;t care. But, this isn&39;t like it used to be where they could vote against you and you pay them hundreds of millions of dollars and nobody knows what they&39;re doing. So, Nikki, that was the right message, and you and I agreed to be sent yesterday. And, I&39;ve had a lot of good comment on it, believe me. People are tired of the United States -- the people that live here are great citizens that love this country -- they&39;re tired of this country being taken advantage of and we&39;re not going to be taken advantage of any longer. Thank you very much. Thank you all very much. Thank you. Appreciate it. Thank you," Trump stated.