LETTER: ANC has drifted from ideals of struggle stalwarts 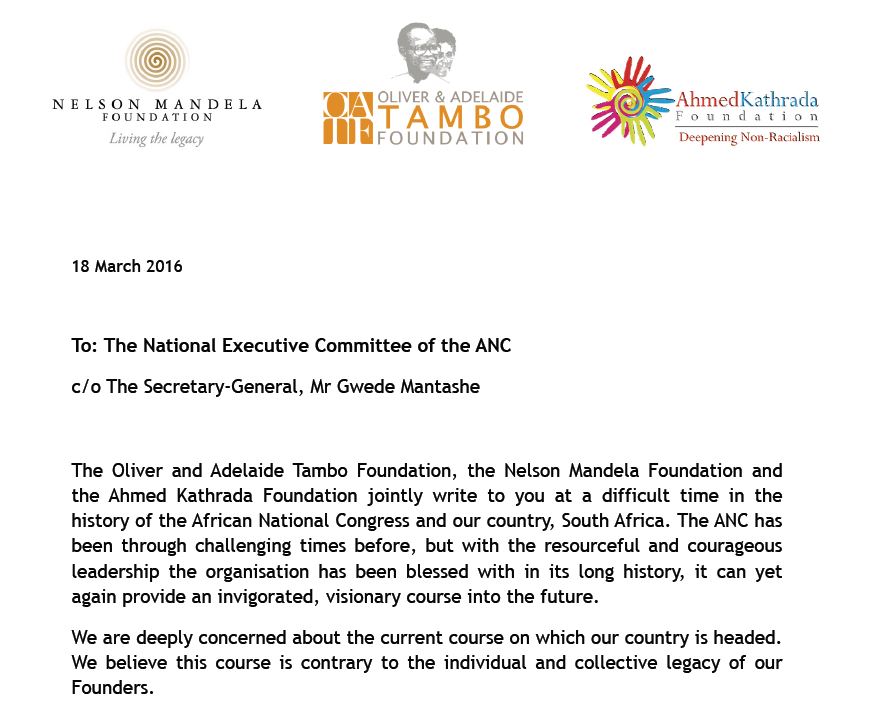 A letter from three prominent foundations has urged the ANC to take decisive action to restore the dignity of the ruling party.

The letter from the Nelson Mandela, Oliver and Adelaide Tambo and Ahmed Kathrada foundations noted that they are “deeply concerned” about stories they have read  about the powerful Gupta family offering ministerial posts to senior ANC members.

The foundations say that the course on which the country is headed is “contrary to the individual and collective legacy of our founders”.

“It seems to us that the ANC has significantly drifted away from the ideals to which our founders and many others dedicated their lives.

“Sadly, by the day, we witness the steady erosion of something very rare in human history: a near universal admiration of a country and what it had pledged itself to
achieve,” the letter noted.

The foundations said the ANC has reached a “watershed moment” and that action should be taken to restore confidence in the ruling party.

“History will judge the ANC leadership harshly if it fails to take the decisions that will restore the trust and confidence of the people of South Africa.”

On Friday, the Ahmed Kathrada Foundation called for a probe into Gupta family allegations.

“The confirmation by Deputy Finance Minister Mcebisi Jonas that he was approached and offered the job of finance minister before the sacking of former Minister Nhlanhla Nene once more puts the spotlight on the need to probe the political influence and power of the Gupta family,” said the executive director of the foundation, Neeshan Balton.

Echoing the likes of the Helen Suzman Foundation and opposition political parties, the Ahmed Kathrada Foundation expressed its support for “an independent and impartial judicial commission of inquiry” into alleged corruption by the Gupta family.

Included in the allegations made thus far are Jonas’s revelation, former ANC member of Parliament Vytjie Mentor’s multiple Facebook posts about being offered a ministerial position by Atul and Rajesh Gupta, and the admission by Barbara Hogan, a veteran ANC member and Kathrada’s partner, that she felt pressured to meet the family.

Read the full letter below: