ANC must get house in order or risk losing 2019 elections: SACP 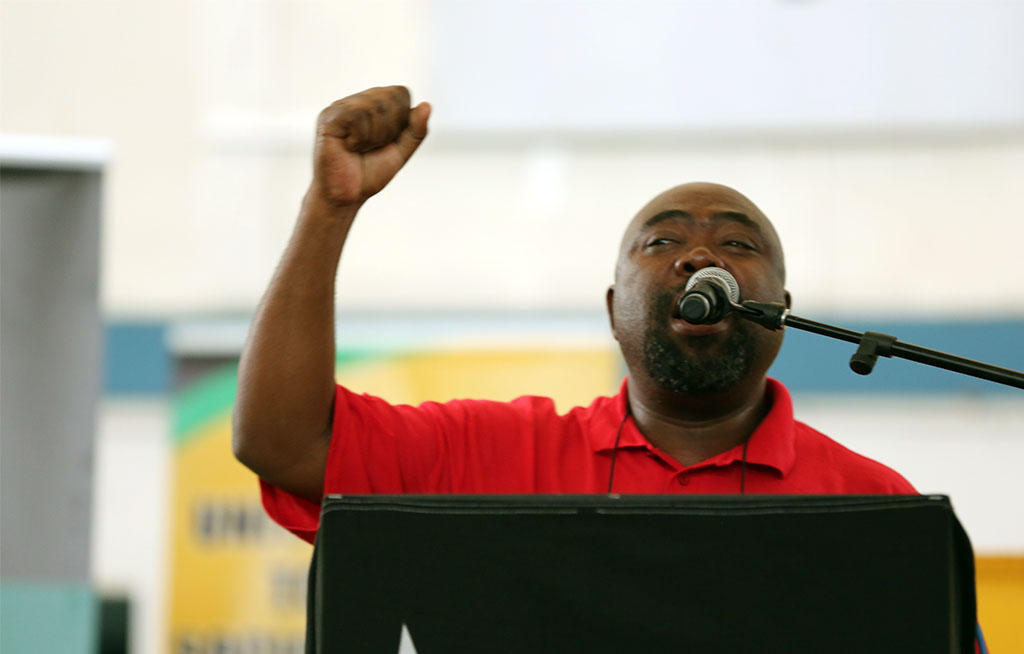 Minister of Public Works Thulas Nxesi, who is also National Deputy Chairperson of the South African Communist Party, speaks at a mini-rally in Khayelitsha for the ruling party's 103rd birthday.

“The downward trajectory affecting the ANC as evidenced from the now rapid trend in its electoral decline, and the apparent lack of capacity or will to deal with the underlying causes and drivers of the waning political hegemony, have become more apparent than ever,” he said at the SACP Mpumalanga provincial congress in Nelspruit.

The ANC and the ANC-led alliance were not short of  analyses of the problems. At the five-day national alliance summit held in the middle of last year it was agreed what they were and this was communicated through the declaration of the summit.

These included “a growing social distance between leadership and our mass constituency, including a disconnect between the focus of branch activities and the social and economic realities of communities [and] crass displays of wealth and arrogance".

These reinforced and were connected to the deliberate manipulation and subversion of internal democratic processes through the gatekeeping of members and the "use of money to advance individual ambitions and factions based on patronage and nepotism”, he said.

Nxesi said that summit had resolved that these deviations should be dealt with firmly and without fear or favour. Those guilty of funding factions and those guilty of accepting money for these purposes should be exposed. The problems lay in implementation.

“That is where the convergence ends and divergences take root because of factionalism and its underlying economic, financial, and power interests. There is just no way a political movement that is infested with factionalism right from within the ranks of its top echelons can ever resolve the problem, its consequences, material basis, and driving forces and factors.

"What we need is the ANC that matches words with deeds and walks the talk in the forefront of our alliance as its leading component.

“There are some who want us to believe that they are genuinely committed to shouldering collective responsibility for the failures that occur in the national democratic revolution. But instead of recognising that the ANC as a governing party is responsible for the policies driven in government, they, on the contrary, want society to believe that the problem lies with a particular department or individual minister,” Nxesi said.

He reiterated that the ANC required a special national conference, similar to Morogoro in 1969. The Morogoro conference was the first national consultative conference of the ANC, held at Morogoro, Tanzania, in April-May 1969.

“This conference will have to be deliberately structured to avoid, among others, crippling divisions, spiralling ill-discipline, despicable arrogance, inexplicable denialism, factional majoritarianism borne out of conferences by delegates hand picked to advance agendas of particular dominant factions, business interests&39; funding and buying of votes ... We must emerge out of this conference with a common vision and ensure that we self-correct, close ranks and unite as we have done since our birth in 1912.

“No one must mistake their factional centralism for democratic centralism and think that by factionally appropriating the leadership of the ANC they will have the backing on the ballot of all those who they have marginalised in stealing the movement. The recent local government elections must be seen a teacher that delivered a decisive lesson in this regard," said Nxesi.

“History calls on us to break the stranglehold of factions that decide who attends and who does not attend and who votes for a particular slate at conferences,” he said.

“We are at the crossroads. We will either fundamentally restructure the organisation, elect new leaders, emerge with new policies, abandon e-tolls, end slates and factions, and deal with corruption and tenders; or we will risk losing our leadership role in the 2019 general election.

"History will judge us as a group that displayed an atrophy of vision and despoiled the gains of liberation due to crass materialism and self-aggrandisement,” Nxesi said.