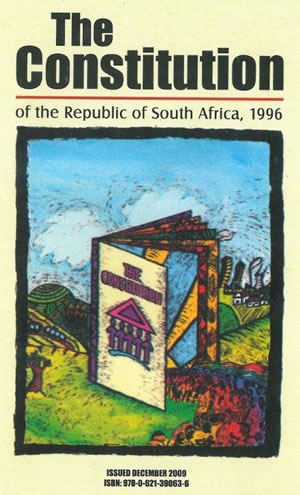 The Constitution of South Africa

PRETORIA - Has South Africa’s much-vaunted constitution helped or hindered the country’s transformation to a democratic, non-racial and non-sexist, prosperous society?

That will be one of the central discussion points at this week’s ANC National General Coucil.

The party has released its discussion documents ahead of the gathering.

In them, it hails the constitution as a source of stability, but warns of forces seeking to use it and the country’s courts, to undermine the will of the majority.

Fetching water is for most of us, a simple turn of the tap.

At worst a mundane daily chore, for some.

But for 59-year-old Capital Park resident Raisibe Monyebodi, it’s arguably a series of violations of her rights to dignity.

She’s forced to crawl under a fence, use a rope to abseil down a steep water canal, scoop the water with a bucket and pull herself up the canal wall again.

Monyebodi said, "We are struggling with water. Climbing down there to fetch the water, then pulling the container up is tough work.

"You even feel the pain on your shoulders"

Threats of a looming eviction from the farm where she and her neighbours have lived for close on three decades compound their sense of helplessness.

She continued, “We have no rights. What rights do we have? None. We&39;re struggling here."

"Whenever there&39;s an election, we vote. We vote in the municipal elections, we vote for the president but we have no rights. We&39;ve been living here for a very long time.”

For Monyebodi and her neighbours, approaching the courts to enforce their constitutional rights seems an expensive and inaccessible option.

But across town from them, Dirk Groenewald is busy with a task he performs so often, it may well be his daily chore.

The Solidarity Centre for Fair Labour Practice lawyer is preparing for the latest round in a string of court battles against government and other employers.

Groenewald and his union insist it’s not transformation they’re fighting, but rather the irrational and unfair application of the constitution, affirmative action and black economic empowerment laws.

Groenewald continued, “The cases we&39;re fighting is the affirmative action cases that is not consistent with the purpose of the act.

"The measures where postions are left vacant in the name of affirmative action, notwithstanding the fact that there&39;s a proper, suitably qualified individual that qualified for the position but weren&39;t promoted just because of the colour of that person&39;s skin."

He said, "The cases we&39;re fighting is employment equity plans that is purely just based on the national racial demographics, without taking into account the pool of suitably qualified individuals from which the employers can choose to promote and appoint from.”

This could easily fit the description of what the ANC’s discussion documents call an ‘emerging lawfare - the tendency by leaders of various sectors in society to seek judicial resolution for matters that can be managed through other channels’.

ANC Head of Policy Jeff Radebe said, “We&39;re not saying we want to deny people their basic right to approach the courts.

"But we need to look at the trend, and the people who are behind all these litigations against the state, that the agenda in our perception, is not people who want normality in society, but it&39;s to reverse the gains...the rationale behind is the mindset of making sure that what has been gained in other areas, such as the political arena must be reversed by the courts.”

BEE Resolution Services CEO Christine Qunta said, “I think the people who&39;ve been able to use the constitution, in some instances to retard transformation are white people because they have the resources. Solidarity, AfriForum, they continually take action against government where government implements affirmative action, employment equity legislation.

"They may not perceive it that way, but it&39;s in effect, or it is seen as an attempt to retard transformation. Unfortunately, I think, because black people do not have those resources, there has not been as active an attempt to enforce their rights to equality and their rights to access to the economic rights.”

That certainly seems the case, for Monyebodi and other residents of the disputed Capital Park farm.

Another Capital Park resident Wilson Mannya said, “On the issue of getting a lawyer to represent us on these many threats of eviction from this farm, we just hear that if you&39;ve worked on a farm and lived there for so many years you qualify for something, even on this water issue, it&39;s all got to do with our lack of information.

"For instance, I thought that if we insist on getting piped water here, we may end up facing problems, unable to pay for the water.”

But in some instances, the state itself has arguably been found wanting in its use, or lack thereof, of the constitution to further transformation.

On land restitution President Jacob Zuma said, “We reassert the correctness of the constitution, but reiterate that the usage of the willing buyer-willing seller policy has had unsatisfactory results.”

"Similarly, in the same time, the courts have never been called upon to give meaning to the property clause in the context of land expropriation or to decide on what is a just and equitable compensation. One would have expected that a matter so pressing as land use, occupation or ownership would predominate the list of disputes in the post-conflict contestation.”

Qunta continued, “The government has to be resolute and use the provisions in the constitution to lawfully push for transformation. And it mustn&39;t be deterred, the expropriation bill is there. They must take that bill through parliament and they must do what is necessary.

&39;Yes, people will always try, those who have resources will try, and that&39;s also their right. The important thing is, what is in the interests of the majority of the people in this country and what is in the interest of the country because, if you want future social and political stability, you have to have a transformed society.”

Radebe said, “We should look at this question, not in the eyes of 2015 but in 1994. We had to deal with the issue of independence for our people so there were many compromises that we had to make at that time, when we came to power.

"But now with the benefit of hindsight, 21 years of this democratic dispensation, we&39;ve come to the realisation that this issue of land has to be dealt with decisively.”

Groenewald said, "When you implement affirmative action, it should not have a negative impact on service delivery.

"So, when you implement affirmative action and when you set your numerical goals or when you set your transformation goals, make sure that it&39;s rational. Make sure that it takes into account the pool of suitably qualified people that can do the work, because if our targets is irrational, we shouldn&39;t expect rational outcomes. Irrational targets will unfortunately have irrational outcomes."

Qunta said, “Up to now no black groups have sought to take white companies who oppose black economic empowerment through various mechanisms such as fraud, through fronting and so on to the constitutional court, to argue that these fraud in black economic empowerment like fronting is actually a violation of black people&39;s constitutional rights to equality, because it hampers access to the economy and therefore it hampers transformation of the economy, and there&39;s no reason why that shouldn&39;t happen.”

In a heartfelt plea that captures the sentiments of so many across the country, Monyebodi said, “We want our leaders to help us with water, toilets and electricity too, if they can. We&39;re struggling, as you can see. We also want houses.”

Monyebodi hopes her plea will cut through the political rhetoric and find resonance with leaders.