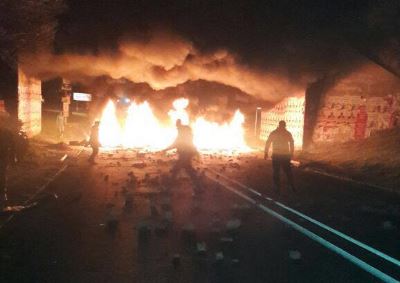 “Those are not ANC members. They are citizens of South Africa involved in crime… they should be arrested," he said.

Tshwane Metro Police say they are still trying to identify the protesters who overturned one of their vehicles in Pretoria on Monday.

Reports suggested they were a group of disgruntled ANC members.

Meanwhile, the ANC in Tshwane will have to make sure it unites its structures.

Tensions have been running high in the capital over who would contest for the position of mayor.

Some members are still not happy with the decision to endorse the compromise candidate Thoko Didiza.

Didiza was brought in to quell a feud over two key candidates who were competing for the position.

The ANC says the two contenders will still continue to serve in the party’s structures.

Deputy Secretary General Jessie Duarte said they will still be the regional leadership.

"We want to give them the opportunity to focus their minds on building the ANC structurally and making sure that they go back to the ground as they are both activists," she said.

We appeal for calm in all areas around the City of Tshwane and the peaceful resolution of differences. TshwaneUnrest

Violence, damage to property & infringing on others rights & free movement will not be tolerated by law enforcement agencies TshwaneUnrest

Perpetrators of the TshwaneUnrest will face the full might of the law.