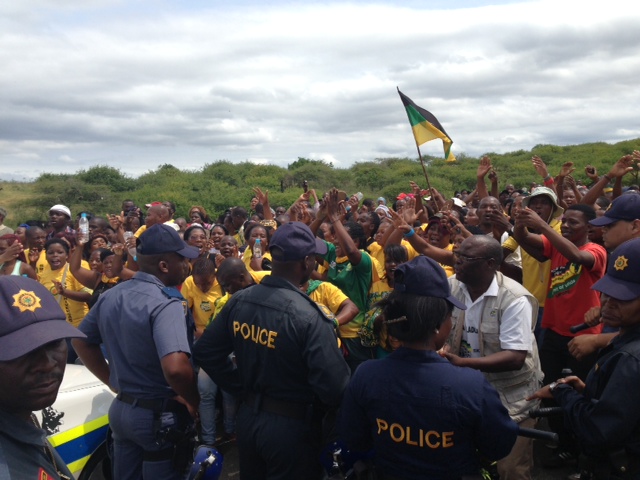 January 11, 2014: Hundreds of ANC supporters have protested near President Jacob Zuma's Nkandla home to disrupt proceedings of the handover of a house built by the EFF for a woman and her grandchildren.

The Economic Freedom Fighters were handing over a house they had built, next to Zuma&39;s homestead, to a woman and her grandchildren.

A heavy police presence monitored the situation since Saturday morning and had kept the two groups separate.

The ANC supporters were on a hill nearby when EFF members emerged from their meeting and began singing.

Some of the ANC group began throwing stones at them and police intervened using truncheons, a water canon and tear gas. Rubber bullets were fired and people ran and dived for cover.

ANC members earlier blocked the road leading to the house and prevented EFF leader Julius Malema&39;s car from driving past.

Malema then got out of the car and walked through the crowd to get to the house.

After he made it through, ANC supporters began throwing bottles of water and stones.

Earlier the several hundred ANC supporters protested near Zuma&39;s home, and marched past the home the EFF had built.

Police used truncheons to stop some of the people and kept the ANC and EFF members separate.

The entrance to the house property, which was about 300 metres from the perimeter fence of Zuma&39;s residence, was manned by a contingent of police officers.

Police had erected a roadblock about a kilometre from the house. All vehicles passing through the roadblock were thoroughly searched.

Around 70 police cars, as well Nyalas, riot vehicles and a police tow-truck lined the road. A helicopter flew overhead.

The EFF said on Friday that Malema would not inspect Zuma&39;s Nkandla homestead.

EFF "central command team" member Sipho Mbatha said: "He is not going to visit the palace. We don&39;t want things to get too excited".

Khoza said EFF workers had been told they could not build the house wearing EFF clothing.

He said the local chief told the EFF that their workers could build the house as long as they did not wear party regalia.

"We just respected him, but we are there each and every day. Maybe later when EFF is in power we can convert it [Zuma&39;s Nkandla home] into an educational facility," said Khoza.

So it seems the ANC has not read the constitution to their Nkandla supporters who attempted to violate Julius Malema&39;s right to movement.