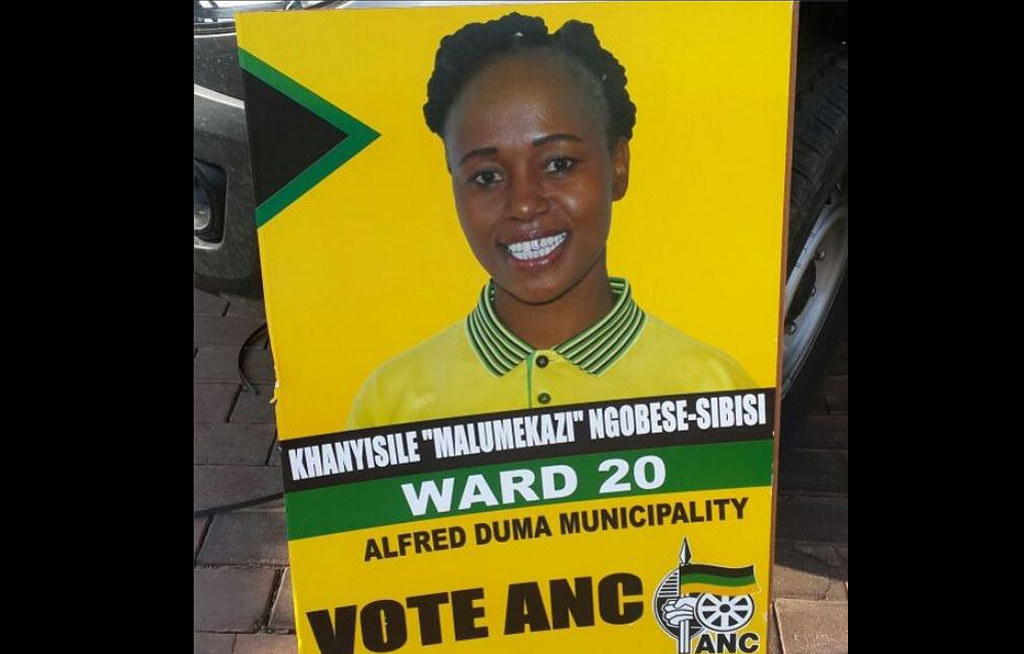 File image of an election poster showing Khanyisile Ngobese-Sibisi, regional secretary of the ANCWL in Alfred Duma Region in Ladysmith, and an ANC councillor candidate for Ward 20.

JOHANNESBURG - The African National Congress Women’s League (ANCWL) on Monday said it had learnt with great sadness the passing of Khanyisile Ngobese-Sibisi who died in KwaZulu-Natal earlier on Mandela Day.

At the time of her passing, Ngobese-Sibisi was the regional secretary of the ANCWL in Alfred Duma Region in Ladysmith, and an ANC councillor candidate for Ward 20.

ANCWL secretary general, Meokgo Matuba, in a statement said the party was sad to lose a dedicated cadre of the movement who worked tirelessly in the interests of the ANC.

Matuba said Ngobese-Sibisi would be remembered as a soldier of the working class and a gallant fighter for the poor.

"Her untimely death is a hard pill to swallow for the ANCWL and we urge the law enforcement agencies to ensure that those who took her life do not go unpunished."

It was unclear how Ngobese-Sibisi was killed or whether suspects had been apprehended yet.

One follower, Mlungisi Ndlovu, commented: "In your leadership we believe. ANC is indeed blessed having leaders like you that are grounded with the masses. May Oliver Tambo give you more strength to lead national democratic revolution toward national democratic society."

Ngobese-Sibisi’s death follows that of another killing of ANC ward councilor candidate in KZN, Bongani Skhosana, who was also gunned down on Monday morning while transporting children to school.

Skhosana was the ward candidate in Ward 1 in the Umzimwabantu Municipality on the lower south coast.

ANC provincial spokesman Mdumiseni Ntuli said in a statement that Skhosana’s killing had brought the number of ANC leaders killed in the province in the last two months to 12.