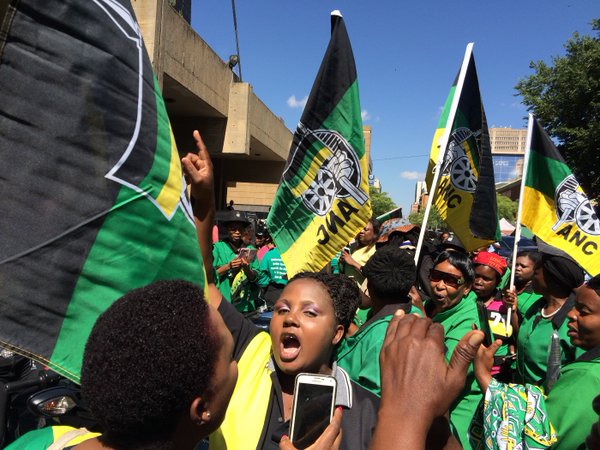 Bikers rev their machines as marchers gather during the ANCWLmarch on parliament, 30 October, 2015.

“Everyone is saying the ANCWL is defending a man and not defending other women. They say there are issues that affect women that we have not acted on. They have short memories,” she said at the Union Buildings.

“Immediately after our election, we were part of the march to do with Oscar Pistorius. Also, we are from the conference which took a decision that was on fighting violence against women and children”.

The ANCWL was received at the Union Buildings by Minister in the Presidency Jeff Radebe.

Several artists, including Chomee, shouted “hands off our president”. Gospel artist Deborah Frazer sent the crowd into a frenzy when she performed some of her hit songs.

She said the ANCWL was “tired of people always insulting our leaders”.

Earlier, Dlamini told reporters that continually complaining about Ayanda Mabulu’s controversial artwork was only going to promote it.

“I actually don’t have a problem with that person who did that sculpture (painting). We are not going to continually talk about that person because he is going to get support,” she told reporters in Pretoria.

Dlamini was leading hundreds of ANCWL members marching from Pretoria central to the Union Buildings.

“If we continually attack him, he will get support. Artists must work hard on their own to get recognition, but what they are doing right now is to steal what they are having,” said Dlamini.

She said the message from the protest march centered on respect.

“If people want power, they must work (for) it.”

The march on Friday also commemorated OR Tambo month.

Some women were wearing their trademark green and black uniform while others wore yellow ANC t-shirts bearing an image of Zuma’s face.

In a statement earlier this week, the ANCWL said: “We condemn the denigration of the image of President Zuma by so-called artists. For example, recently the portrayal of the president’s genitals in the mouth of a woman.”

In recent years there have been a number of paintings depicting the president with exposed genitals, sparking outrage in certain quarters and a heated defence of freedom of expression from others.

This week Zuma’s son Edward said he was upset by the denigration of his father and warned that he would “deal with” Mabulu if ever they were to meet.