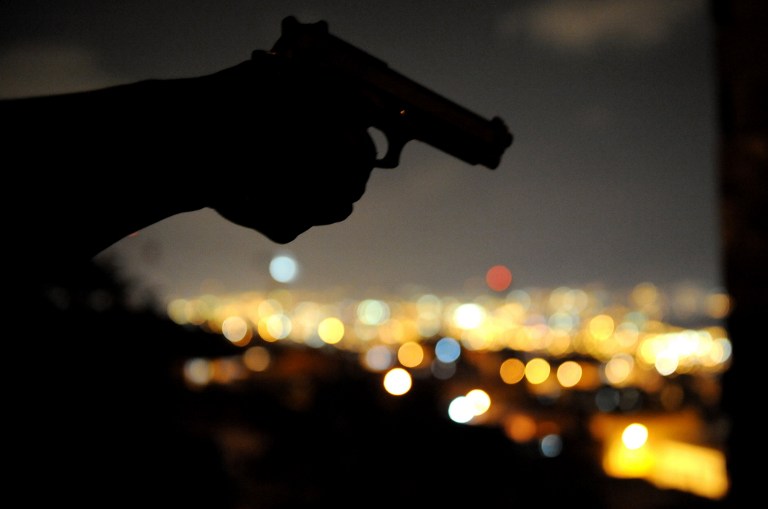 A member of a criminal gang holds a gun at Northeast Commune - one of the shantytowns with the highest rates of urban violence and displacement due to disputes between gangs - in Medellin, Antioquia department, Colombia, taken on January 21, 2010.

MBHIZANA - Eastern Cape police are investigating a case of murder following the assassination of a Wild Coast anti-mining committee leader at his home.

Sikhosiphi “Bazooka” Rhadebe, chairman of the Amadiba Crisis Committee, was shot eight times in the head in Lurholweni on Tuesday night.  The committee has been fighting against titanium mining in the area

“It’s alleged that two men pretending to be police went into Rhadebe’s house and shot him in front of his family. No arrests have been made. Police are gathering information. We are appealing to members of public with any kind of information linked to this case to contact the nearest police,” said Matidane.

Rhadebe’s wife and child were not injured but have been admitted to hospital for shock.

We are shocked to tell the public that the chairman of Amadiba Crisis Committee, Sikhosiphi Bazooka Rhadebe from... https://t.co/tbgJmkGThN

Amadiba Crisis Committee confirmed the incident, adding that they will not be intimidated into submission.

“Our beloved Bazooka made the ultimate sacrifice defending our ancestral land of Amadiba on the Wild Coast. After one year of threats and attacks, we have been waiting for something like this to happen.

“The local police refused to cooperate with the Umgungundlovu traditional authority of the coastal Amadiba area to stop the violence against our community, which says no to mining,” read the statement issued on Wednesday.

RIP Sikhosiphi &39;Bazooka&39; Rhadebe. We pray for his family. Long live the spirit of this community activist. @SAFCEI https://t.co/OdeZCLR80Z