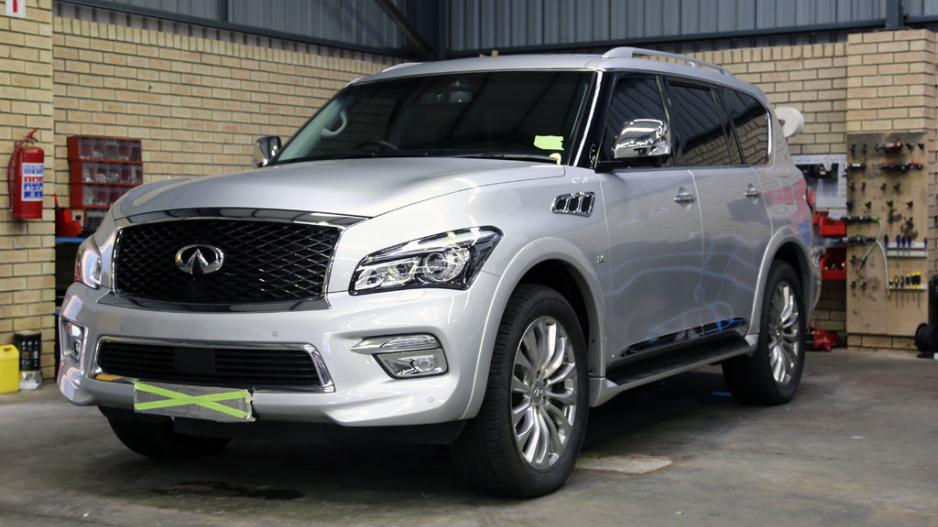 The Infini QX80 will be released in South Africa in February 2015. It will be available to South African motorists with bulletproof windows and car armour straight off the showroom floor. The dealer says this is due to increased demand for safe vehicles.

JOHANNESBURG – Flashing blue lights and a convoy of black SUV&39;s are a sure giveaway that bulletproof cars are passing.

Yet, most armoured cars on Johannesburg roads look almost identical to their “soft” counterparts.

“They look no different on the road. You may be driving next to armoured cars on a daily basis, you wouldn’t notice,” says Ryan Holmner, dealer principal at Infiniti Melrose.

Infiniti is the luxury car brand owned by Nissan. In South Africa, it is taking on more established German manufacturers by offering armoured cars, in three different models, at competitive prices.

“A client can go in and order a vehicle off the floor from Infiniti with full motor plan, warranty and everything,” says Grant Anderson, managing director of Armormax.

Armormax, an American company with several workshops around the world, uses military-grade plastics and bulletproof glass to safeguard vehicles against gunfire.

The two companies are partnering in a new venture offering South African motorists the option of three armoured Infiniti models off the dealership floor.

Anderson says  the decision to offer shop-ready armoured cars is informed by crime rates in South Africa. Demand for bullet-proofing has increased steadily over the last four years.

“We’ve been building vehicles for them [Infiniti] for a while now, and we literally can’t keep up.”

Holmner, who sells bulletproof cars from a dealership near Melrose Arch, says that over the last six months he has noticed increased interest in armoured cars from individuals and companies.

“We’re not the first manufacturer to offer a factory armoured complement, but we certainly are different from a price point,” he explains.

“We have cars from German rivals, but they start at R2.5-million to R3-million.”

“There is really no set client: Mixed races, all genders, it’s really a mixed bag. I think people have always had the impression armoured cars are for presidents and royalty.

While there may not be a “set client”, those buying bulletproof vehicles from Holmner have at least three things in common:

- they are based in Gauteng

- they have a budget of up to R3-million

- and they often buy an armoured car after a brush with crime.

“It is, a lot of the time, an impulse buy,” says Holmner. “Having said that, once they’ve bought, I’ve never had a client who regretted it.”

After an armed robbery, clients at both Infiniti Melrose and those who approach Armormax directly to armour a car they already own, are willing to fork out for bullet-proofing.

Anderson says one potential client contacted Armormax after he and his family were held up by armed robbers on William Nicol Drive three weeks ago.

He says the incident occurred in rush-hour traffic and criminals made off with cellphones, watches and other valuable items.

The client then contacted Armormax to enquire about bullet-proofing.

Any car, at a price

Asked if they can armour any car, Anderson says they can, at a starting cost of an estimated R500,000.

The Johannesburg workshop even armoured a 1960s Beetle for a very wealthy South American client, and they have revamped vehicles for heads of state on the continent.

Bulletproof windscreens alone can cost anything between R120,000 and R300,000 depending on the thickness of the glass and the kind of gunfire it can withstand.

Both Anderson and Homner have heard from clients whose lives have been saved thanks to car armour, especially bulletproof windows.

The responsibility of building safe cars is front of mind for the man who leads the build team at the Armormax workshop in Johannesburg.

“When I do armouring, I must do a proper job, because it’s the life of the person,” says lead technician Patrick Zenda.

Zenda adds he knows of people -- ADT security guards and clients&39; families -- whose lives were saved because of armour he and his team installed.

However, while Armourmax staff install bullet-proofing, they don’t drive armoured cars themselves.

Even director Anderson’s personal car is not armoured, though he says he is in the process of having it fitted with some bullet-proofing.

For the majority of motorists who cannot afford north of R500,000 worth of armour for their vehicle, Anderson says smash and grab tints are a good start and awareness on the road is key.

“Smash and grab is a good product. Really, that’s to stop a blunt object crashing through. It cannot stop a bullet.”

Trade-ins at a fraction of the cost

Holmner says those willing to buy older cars can look at bulletproof trade-ins, starting at around R300,000, for cars that are eight to 10 years old.

While these models may not be as flashy as mint cars in the same price range, he says, they come with peace of mind.

“We’ve had one incident of a client, literally, it saving his life,” says Holmner.

He describes armed robbers ambushing a motorist who was entering the driveway of his Johannesburg home. When he noticed the robbers and began driving away they aimed their guns at his head, through his car window, and began to fire.

“Had he not had that armour, he wouldn’t be alive.

“The whole body of the vehicle is in a sealed cocoon – the doors, the body, the undercarriage, the tyres, everything is completely secure.”

“Really, all an armoured car does is buy you ime to get out of trouble, and it does that very effectively.”

Car armour is an option for “everyday millionaires” who have the means to buy some peace of mind.

However, it remains an unfeasible option for the remaining everyday South Africans.