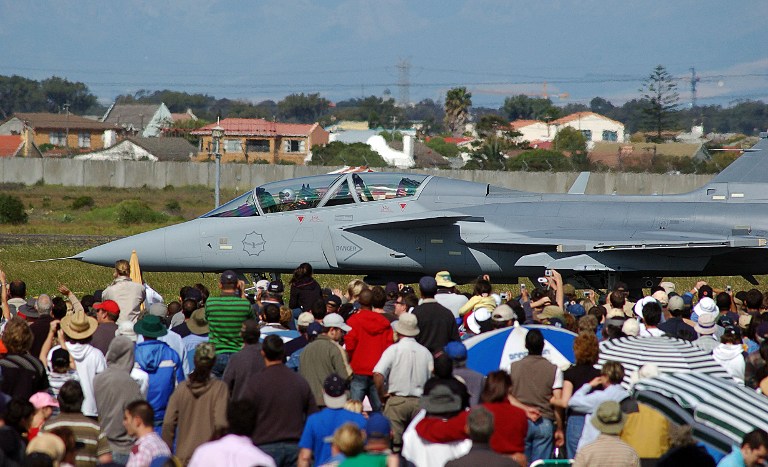 File IMAGE. One of the Saab Gripen fighter jets, recently bought by the South African Airforce, as part of the country's controversial arms deal, sits at the Africa Aerospace and Defence airshow, at Ysterplaat Airforce Base, in Cape Town 23 September 2006

The commission of inquiry into the multi-billion rand arms deal will proceed despite the resignation of a commissioner, commission spokesman William Baloyi said on Friday.

"Definitely, the proceedings of the arms deal commission are on course and will commence on [Monday]," he said.

It was unclear whether Judge Francis Legodi, who resigned from the commission on Thursday, would be replaced.

"We will get guidance from the presidency or the justice department on the matter of whether to replace [Legodi] or proceed with the two," said Baloyi.

President Jacob Zuma announced the establishment of the commission in October 2011. Since then, it has been dogged by claims that its integrity might be compromised.

A senior commission investigator quit in January. Norman Moabi, a lawyer and former acting judge from Pretoria, alleged in a letter, leaked to Beeld newspaper, that the commission was not being transparent and was concealing an alternative or "second agenda".

Moabi wrote in the letter, which was addressed to Seriti, that he was resigning because of interference and because he had lost faith in the commission&39;s work.

"I joined the commission to serve with integrity, dignity, and dedication to truth. I cannot, in all conscience, pretend to be blind to what is actually going on at the commission," he wrote at the time.

Regarding Legodi&39;s resignation, presidential spokesman Mac Maharaj said he quit for personal reasons and had asked that these remain confidential.

On Wednesday, Maharaj said Zuma was considering extending the commission&39;s term by a year. It was scheduled to run until November.

Former president Thabo Mbeki, Minister in the Presidency Trevor Manuel, former intelligence minister Ronnie Kasrils, and Congress of the People leader Mosiuoa Lekota were among those expected to testify in the first phase of the inquiry.

The deal, which was initially estimated to cost R43 million, has dogged South African politics since it was signed in 1999, after then Pan Africanist Congress MP Patricia de Lille raised allegations of corruption in Parliament.

Zuma himself was once charged with corruption after his financial adviser Schabir Shaik, who won a tender to supply part of the requirements, was found to have facilitated a bribe for him from a French arms company.

The charges against Zuma were dropped in April 2009.