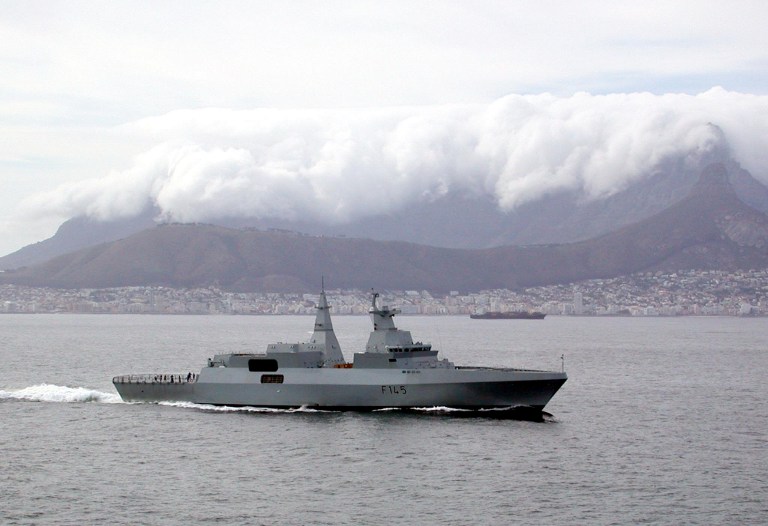 FILE image (November 4, 2003). The naval corvette SAS Amatola, the first of four naval corvettes bought from a German company under a multi-billion arms deal to arrive in the country, sails past Cape Town on its way to the the naval base in Simon's Town.

CAPE TOWN - Public hearings into alleged corruption in the 1999 multi-billion rand arms deal get underway in Pretoria on Monday.

This would come after a five-month delay and the 11th-hour resignation of one of the commissioners.

The Arms Procurement Commission said on Friday its schedule would not be derailed by Judge Francis Legodi&39;s departure.

"Definitely, the proceedings of the Arms Deal Commission are on course and will commence on [Monday]," commission spokesman William Baloyi said.

But the Democratic Alliance noted that the judge&39;s resignation -- for undisclosed personal reasons -- was "the latest setback in a series of setbacks" suffered by the commission since it was established by President Jacob Zuma in November 2011.

These include the immediate resignation of Judge Willem van der Merwe, followed by those of senior investigator Norman Moabi in January and law researcher Kate Painting in March.

Baloyi said on Sunday that one of the evidence leaders, Tayob Aboobaker, retracted his resignation letter. Baloyi could not disclose why he wanted to resign. However, according to the Sunday Times, which said it had seen the resignation letter, Aboobaker criticised the commission for nepotism, lack of professionalism, and infighting.

When Moabi left the commission he hinted at a whitewash by claiming commission chairman, Judge Willie Seriti, had a "second agenda". He said facts were manipulated and input from independent-minded commissioners was ignored.

On Friday, Moabi commended Legodi for resigning and voiced further doubts about the integrity of the commission&39;s investigation into the arms deal. The deal has dogged South African politics since it was signed and nearly scuppered Zuma&39;s ascent to the presidency.

"I commend the judge for having listened to his conscience and subsequently leaving the commission," Moabi told the Mail & Guardian.

"People should be very wary and watch what unfolds at the commission, if it proceeds. Particularly if any evidence will be heard in camera, for alleged security related issues in the interest of the state." Hearings were initially due to start in March, with a different list of witnesses from those now expected to be called.

Eyebrows have been raised because Fana Hlongwane, an arms consultant and adviser to late defence minister Joe Modise, was taken off the witness list. Seriti said he could not be located.

Hlongwane is suspected of receiving tens of millions of rands in bribes linked to the arms deal. His testimony was therefore seen as crucial to the current investigation.

Anti-arms deal campaigner Terry Crawford-Browne, who launched a court bid that forced Zuma to appoint the commission, had expressed dismay with the new witness list and the commission&39;s work thus far.

"It seems evident to me that the schedule announced is just more foot-dragging and cover-up, and further evidence of still more bad faith and male fide," Crawford-Browne said.

In the meanwhile, the commission had acknowledged concerns it may run out of time and money.

It was appointed until November with a budget of R40 million. But the hearings were scheduled to continue until January next year, with Baloyi saying their completion was contingent on Zuma extending the commission&39;s term.

Presidential spokesman Mac Maharaj has said the presidency was considering this.