Artist and photographer Zwelethu Mthethwa pleads not guilty to murder 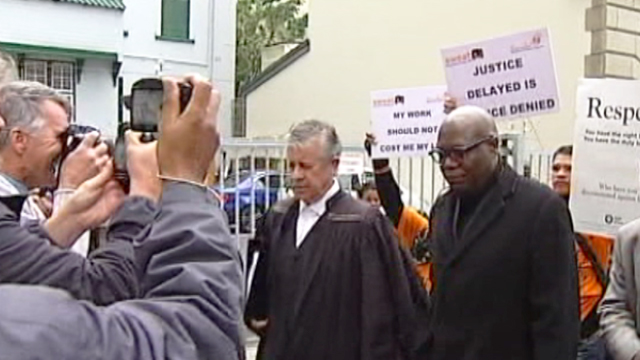 Western Cape, 2 June 2015 - The murder trial of Zwelethu Mthethwa is expected to start at the Western Cape High Court on Tuesday. Mthethwa, an internationally acclaimed artist, is accused of murdering a Cape Town sex worker in 2013.

CAPE TOWN – Internationally acclaimed artist and photographer Zwelethu Mthethwa has pleaded not guilty to the 2013 murder of a 23-year-old sex worker.

Mthethwa’s trial, in which he is accused of kicking and beating to death Nokuphila Kumalo in Ravenscraig Road in Woodstock in 2013, finally got underway on Tuesday after two years of postponements.

A plea explanation was not handed in to the Western Cape High Court. Kumalo’s body was found in the early hours of Sunday, April 14 2013.

A crowd of sex workers had protested at each of his previous court appearances and on Monday, when his trial got off to a false start, they had again gathered around Mthethwa as he left the court and followed him down the street, shouting slogans.

On Tuesday, his defence advocate William Booth appealed to the court to protect his client. He said Mthethwa has been harassed, pushed and shoved and that earlier on Tuesday “they pushed their placards under his umbrella”.

Booth argued that the protesters could express their views in a “legal fashion” and said he had found their behaviour “of a concerning nature”.

Booth said Mthethwa had felt intimidated and would need protection when he arrived and left court if the behaviour did not stop.

Judge Patricia Goliath told the court “Mthethwa’s dignity must be respected as he is innocent until proven guilty.”

She urged protesters not to harass him and said she hoped this would be conveyed to those waiting outside the court.

Sally Shackleton, the director of Sweat, a group that fights for sex workers’ rights, denied they had been harrassing Mthethwa. She said the women were “fulfilling their right to protest and that sex workers are often ignored, but will not be ignored anymore”.

Earlier on Tuesday, State prosecutor Christenus van der Vijver said the state would allege that Kumalo was “unlawfully and intentionally kicked with a booted foot and that the death of the victim was caused by the accused”.

He said the State’s evidence included CCTV footage of the alleged incident. van der Vijver said the footage had assisted police in their search for the vehicle and the registered owner of the vehicle.

Evidence would be led on the reliability and authenticity of the footage, as well as the vehicle’s tracker system.

The State also planned to call a gait forensic expert who studied the gait of the man captured in the footage together with other footage of Mthethwa captured at a later stage.

Van der Vijver said the whereabouts of the security guard who found the body were unknown, but the State may bring an application to have his statement admitted as evidence.

The first witness called to the stand was Constable Asanda Sasha who is stationed at the Woodstock police station.

He testified that he had received a complaint from the police radio controller about a body found on the side of the road.

He described how he arrived on the scene where there was a security guard standing by the body. He noticed injuries on the woman’s face and an ambulance was called.

Sasha also told the court that a woman then arrived on the scene and seemed to know the deceased.

The trial was postponed to June 8 when the State was expected to introduce the video footage as evidence.

Outside court stood a small group of women chanted “no woman, no cry”.