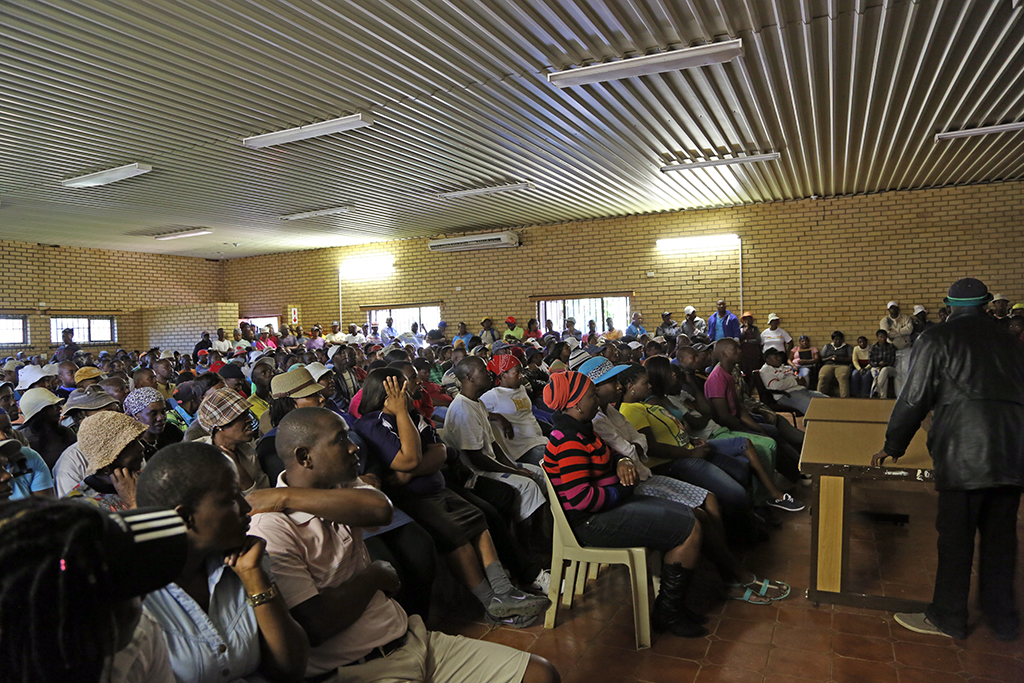 The Bapo ba Mogale community in the platinum belt holds a meeting with the tribal authority demand. Residents are demanding temporary closure of a Lonmin mine following killings in the area.

RUSTENBURG - The Bapong community in the platinum belt is demanding that a local Lonmin mine be temporarily shut down until the nearly four-month-long mining strike is over.
Lonmin sits on tribal land belonging to the Bapo ba Mogale community and receives royalties from the mine.
Residents are terrified after a number of people, including two miners, were killed on their land over the weekend. Six others were also stabbed while a group of around 10 men had to run for their lives when they were approached by armed men on their way to work.
"We want our chief to come and talk to us. He must take the mining certificate from Lonmin so that the strike can end. We want this strike to end," said resident Margaret Lebesana.
"Last night we did not sleep, guarding each other as residents of this area. People are killing us like chickens on our land," she added.
Residents say although there is a police presence and mine security in the area, it is not sufficient. They say that security patrols at bus stops and main roads but attacks happen at their homes.
"We have had enough of the strike and what is happening in Bapong. Now people have died and I am asking that this can&39;t happen to Bapong people," said Ivy Mokono, a resident.
The community says it will not go to work until the strike has been resolved. They want the mine shut down, saying they are not part of the strike but the bloodshed is continuing.
"We are sick and tired as the residents of Bapong. We are caught in a hard place. Lonmin is telling us to come back to work -- but on the other hand we are getting killed on our way to work. We want government to come and solve our problems," said Ofentse Madiba.
The community met with the tribal council on Tuesday to raise their concerns and demand that the council approaches Lonmin about temporarily shutting down.
"The option of temporary closure is a viable option in the sense that no one will sneak and go to job until one makeshift solution is in place," the council&39;s Churchhill Madumo said.
He adds that security in the area is a concern and that police and mine security are working to protect the community.
"As far as safety is concerned we must consider state agents of safety and at the same time we must consider what Lonmin can do. That is why I say all issues raised here we must go to Lonmin now and raise them with Lonmin and give these people feedback as soon as today," he said.
Lonmin could not be reached for comment.