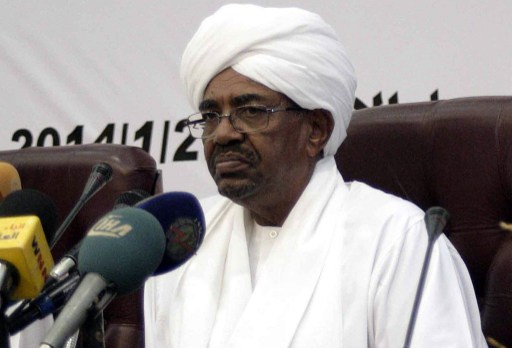 Sudan's President Omar al-Bashir delivers a speech on January 27, 2014 in which he appealed for a political and economic renaissance in his country ravaged by war, poverty and political turmoil, in the Sudanese capital Khartoum.

JOHANNESBURG – Sudan’s President Omar al-Bashir reportedly touched down at Waterkloof Airforce base near Pretoria on Saturday.

And it emerged that the South African government had urgently dispatched an envoy to the International Criminal Court (ICC) in The Hague to explain why it was letting him into the country and not arresting him.

Bashir had been keeping everyone guessing all week about whether he would arrive in Johannesburg for the AU summit. He is wanted by the ICC for genocide and other crimes and South Africa as an ICC member is obliged to arrest him.

But late on Saturday evening he was reported to have arrived at Waterkloof Airforce base en route to the AU summit in Sandton, Johannesburg.

When Bashir was due to visit South Africa for President Jacob Zuma’s inauguration in 2009 and for the World Cup in 2010, South African officials warned ahead of time that he would be arrested if he arrived. He did not come.

But the South African government’s argument this time is that this is an AU event and so it does not have control over who attends. Bashir was invited to the summit and the AU, in fact, has a policy that its member states should not co-operate with the ICC.

Yesterday South Africa’s ambassador to the Netherlands and the ICC, Bruce Koloane, met officials of the ICC prosecutor Fatou Bensouda to put forward that argument.

Anton du Plessis, executive director of the Institute for Security Studies (ISS) in Pretoria said last night he had heard that Koloane explained to the ICC that Bashir should enjoy diplomatic immunity from arrest because it was the AU and not South Africa which had invited him.

This argument was evidently based on a comparison with the UN in New York which foreign leaders attend without fear of arrest even if they are wanted by the US government for crimes.

Du Plessis said he understood that the ICC prosecutor’s office had rejected South Africa’s argument outright, arguing that there was no comparison with the UN and New York.

They pointed out that the UN had an immunity agreement with the US regarding attendance at the UN, whereas South Africa had no such agreement.

It is understood that the National Prosecuting Agency had issued a red notice to the SAPS to arrest Bashir if he did land. But it is not likely that the police will execute the arrest warrant if the government instructs it not to.

Du Plessis said what the government was evidently doing was “clearly wrong. South Africa had decided to ignore its obligations, not only to international law, but also a domestic legal obligation".

“The ICC Implementation Act which obliges the South African government to arrest fugitives from ICC justice is a domestic law. South Africa has decided on the basis of African solidarity and anti-ICC sentiment in the AU to renege on its own national legal obligations.

“This is a sad day for South Africa which until now has been a great champion of the ICC and of international justice.”

Du Plessis said that some were saying this was the death knell for the ICC. But he said it was more damaging to South Africa than to the ICC.

The ICC has been struggling, especially in its efforts to try Kenyan President Uhuru Kenyatta. The ICC’s chief prosecutor, Fatou Bensouda eventually dropped the case against him because she couldn’t muster enough evidence, largely because so many witnesses disappeared mysteriously.

The AU turned against the ICC because it said the court was biased against Africa as every one of the people it had indicted so far had been African.

South African government officials have been running for cover at the summit, refusing to confirm or deny that Bashir was coming. Even as the reports came in that his presidential aircraft Sudan One had landed at Waterkloof, International Relations and Co-operation Minister Maite Nkoana-Mashabane, claimed to know nothing.

“ I have been very busy with meetings at the summit so I really don’t know,” she said.

Another South African official said “it would totally destroy our standing in the AU if we arrested him”.

The ICC’s usual response to such defiance of the obligations of member states, is to refer them to the UN Security Council for action. So far the council has not penalised any state for doing so. – ANA

I have to ask: SA won&39;t give the @DalaiLama a visa but it is cool for Sudan&39;s Al-Bashir to come - who is stamping passports? AUSummit

Sudan&39;s President Omar al-Bashir has been welcomed by South African officials and Sudanese diplomats on his arrival in the country.