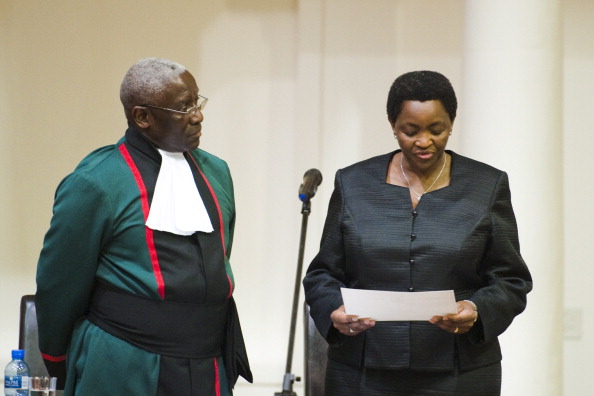 New Minister of Social Development Bathabile Dlamini as New South African ministers and deputy ministers are sworn in at the Presidential guesthouse in Pretoria, South Africa on 1 November 2010.

JOHANNESBURG -  Social Development Minister, Bathabile Dlamini, has been elected as the new president of the ANC Women&39;s League.

Her second-in-command will be Sisi Ntombela who has taken the deputy presidency position. The Free State Women&39;s League chairperson ran unopposed.

There are at least 3,000 delegates attending the league&39;s 12th elective congress in Irene, near Pretoria.

ANCWL Presidential Candidate Bathabile Dlamini&39;s supporters are not hiding who they are going with pic.twitter.com/Vq0DZusRp7

As the long-delayed Women&39;s League&39;s conference in Pretoria, drew to a close, the leadership battle between incumbent, Minister of Basic Education Angie Motshekga, and Social Development Minister Bathabile Dlamini, finally drew  to a close with Dlamini proving victorious.

Earlier, Sisi Ntombela was elected unopposed to be the Women&39;s League Deputy President.

The Women&39;s League has in the past few years been perceived as ineffective in promoting women&39;s issues. It will hope that its new leadership changes the public&39;s perception and once again becomes the key driver of issues affecting women in South Africa.

The "We Are Ready For A Female President" brigade lost? Cyril must be smiling. ANCWL

Angie Motshekga delivered her last political report as president of the league.

The effect that mama Angie Motshekga is having on these ANCWL comrades. She&39;s delivering her pol report SABCNews pic.twitter.com/aAiPXrmgLp

KZN delegates dance their way to the ANCWLConference venue pic.twitter.com/fvcbreUxHd

ANCWL media briefing on the proceedings of the ANCWLConference starts now pic.twitter.com/HQAASOYaaD