Black Friday marketing in SA has tripled since 2015 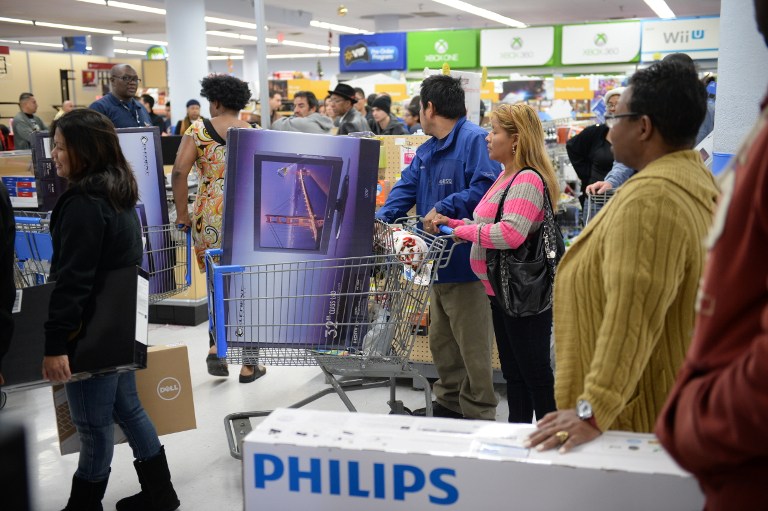 People wait to pay for their purchases at a Walmart in the Crenshaw district of Los Angeles on Black Friday, November 29, 2013.

JOHANNESBURG – Black Friday 2016 has become more popular than the previous years and its all thanks to social media.

Recent stats released by a marketing agency, 25AM, suggests that the social media conversation around this event has almost tripled in comparison to the same period last year.

Andre Steenekamp, 25AM CEO, suggests that this is because consumers are looking for better prices and bargains as the SA’s economic growth has been sluggish.

Additionally many new brands have joined this annual shopping extravaganza.

As to whether Black Friday would have an impact on the economy, it is still unsure.

After speaking to eNCA, Economist Azar Jammine believes that people are under a lot of pressure and will flock to buy items on discounts.

He also believes that majority of the products bought will be for the festive season.

"It is possible that a portion of the population will be doing Christmas shopping," he stated.

The 25AM Online Media Agency‎ compiled these graphics showing how Black Friday has affected consumer and retailers behaviors on social media.

Twitter has been dominating the conversations on Black Friday as users have been tweeting some of the products they would like on discount.

Big brands have been creating awareness for their Black Friday specials on Twitter and via email.

Retailers are competing tooth and nail to market their deals and increase their sales for Black Friday.

According to stats, Game currently in the lead.

Big brands are creating awareness for Black Friday via Twitter and email marketing.

Checkers even promoted their own #checkersblackfriday on the platform.

Steenkamp also suggests that many new brands have joined this annual shopping extravaganza.

In terms of demographics, the interest between male (47.5%) and female (52.2%) remains mostly on par, with women just slightly edging out their male counterparts.

In terms of age, 25 – 34 year olds are the most active in Black Friday conversation on social media, closely followed by the 45-54 age group.

While the 55-64 year olds remain the least active.

This could also indicate which age groups are likely to utilize online shopping facilities as opposed to travelling to shopping centers.

Twitter users have even joined in the hashtag tweeting about what they would like on sale for Black Friday.

@NikeRunningZA do you have #BlackFriday deals? I need a sports bra strong enough for running --‍?? .

Only Black Friday deal Ima be participating in -- pic.twitter.com/1TMcHQG9vB