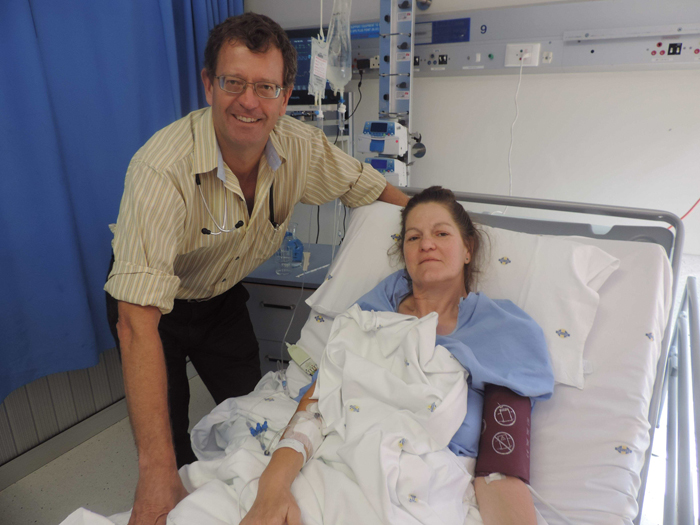 Mitzi Hazell was attacked by a black mamba snake in her yard in Inchanga, KwaZulu Natal

Hazell was discharged from Durban Netcare&39;s St Augustine&39;s Hospital on Friday after spending a week in the intensive care unit. She is recovering at home with her husband following the incident.

The black mamba bite was the second encounter with a venomous snake that Hazell experienced in the space of two weeks. She previously faced a Mozambican spitting cobra who spat venom directly into her eyes. Her neighbour, Elthea Coffee was able to get Hazell to a local hospital to receive treatment.

Hazell&39;s second run-in with a serpent resulted in a brush with death.

It was 35?C with little shade on Friday, 1 April when Hazell decided to check on her pedigreed show rabbits. "I saw one of my rabbits lying motionless in the cage. I screamed and rushed her into the house. My husband and I went out to check on the other rabbits when we saw the snake. We didn&39;t know that it was a black mamba," she told eNCA.

Hazell described the 2.2 metre long snake as being very aggressive when confronted. The mamba reportedly leaped from over a metre away and bit her on the leg. "Within minutes I knew I was in trouble. I felt a terrible burning, like pins and needles, in my leg. It felt like my blood was boiling. The pain was radiating up my leg; I was battling to breathe and started feeling weak," she said.

Hazell asked for help from her neighbours via a Whatsapp group and again Elthea stepped in to support her. She helped Hazell into her car in order to take her to the closest hospital when they were informed that the required anti-venom to treat her was unavailable. Andre Grov, another neighbour, decided to step in to assist. He dragged the paralysed woman into his car and sped to St Augustine&39;s in under ten minutes. In the interim, another neighbour, Michelle Schrauwen contacted the hospital, where a team was ready and waiting to treat Hazell.

Hazell was attended to by Dr Kevin McEwen, who administered five ampoules of anti-venom serum, while her vitals were constantly monitored.

“It was a long Friday night for the entire medical team involved in her treatment,” remembers Dr McEwan. “Intensivist and anaesthesiologist, Dr Mark Watt, took over halfway through the night, together with specialist physician, Dr Shabbir Dawood, who continued to monitor Hazell’s progress in the hours that followed. Everyone pulled together.”

Hazell returned home on Friday despite still experiencing pain and swelling in her injured leg. “My advice to the public would be to allow such snakes to move away and not confront them. The number of snakes we are seeing at the moment could be attributable to the heat and the fact that the snakes could be readying themselves for hibernation,” she cautioned.

Although the experience left her fearful of other encounters with snakes; Hazell expressed her gratitude to the neighbours who helped her through it all. "The prayers and support of the community is what really got me through," she said.

In terms of advice for victims of the potentially deadly black mamba bite, Dr McEwan suggests that they be taken to the nearest hospital, which is equipped with a substantial stock of the appropriate anti-venom and can support the respiratory system and handle the ensuing anaphylactic shock.

He warned those who believe that they are safe from harm when armed with an ampoule of anti-venom that this may not be sufficient to save a black mamba bite victim. “Furthermore, the consequences of using anti-venom without the ability to stabilise a patient experiencing a severe anaphylactic reaction can be deadly in itself,” he added.