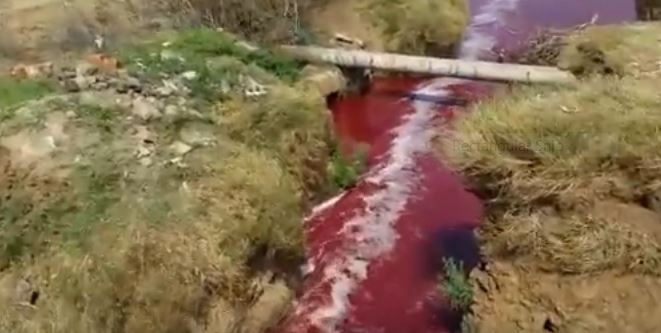 A screengrab shows bloody water from an abattoir in Welkom, Free State.

JOHANNESBURG - Bloody water from a local abattoir and untreated sewage are contaminating the drinking water of Welkom in the Free State, AfriForum said on Wednesday.

But as the WWTW was dysfunctional, the Matjhabeng Local Municipality broke open a sewage manhole to relay the water.

"What is of great concern is that the raw sewage and blood are flowing into the pans from which Welkom’s drinking water is sourced," Terblanche said in a statement.

"This water contamination can be stopped by the municipality, but they’re not lifting a finger."

Johann Hattingh, provincial coordinator for AfriForum in the Western Free State, said the sewage plant does not get maintained, and a sewage plant is the one thing that must work within a municipal area for the health of residents.

"At two other places in the Western Free State, raw sewage is also flowing into full pans, which then overflows onto farmers’ cultivated fields.

"Cries for help to the municipalities are merely ignored. AfriForum will try with all its might to solve all three these situations. It may not continue."

AfriForum said it will be issuing the Department of Water and Sanitation, the Municipality and the abattoir wilth attorney letters.

It demanded the situation to be fixed, otherwise it said it will pursue legal action.