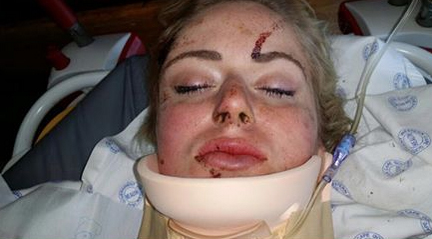 A photo of 18-year-old Sanet de Lange posted on Facebook by her brother Marius Strydom. De Lange was allegedly assaulted in an altercation with meter taxi drivers outside Tiger Tiger nightclub in Cape Town.

CAPE TOWN – Marius Strydom, the brother of an 18-year-old girl allegedly assaulted after getting into a meter taxi outside Cape Town’s Tiger Tiger night club last Thursday, has laid into metered taxi services.

Strydom posted a photo of his sister, Sanet de Lange&39;s face on social media and warned that meter taxis are dangerous.

His post on Facebook, accompanied by a picture of his sister&39;s bloodied face, said: “This is the reason why Uber shouldn&39;t be taken away from Cape Town. My sister was dragged out of a taxi, kicked and assaulted and they tried to pin her down.

“Luckily she got away since she&39;s a fiesty tough b*&^h and apparently ran and took cover under a church. I am so proud of my sister for being such a strong woman and that she could protect herself from them. You are an inspiration.

Officers from the Rondebosch police station reportedly picked up De Lange from the side of the road and took her to hospital. She had a gash on her head and some scrapes and bruises.

Strydom later replied to the comments, giving an update on the incident.

His second post said: "Thank you everyone. She kind of remembered what happened, that she was attacked by four men – kicked and stomped by them. Fought them off, she got away.

“She ran faster than them. While they chased her, she threw herself over the church wall and then covered herself completely with a big pile of leaves (thank heaven it&39;s winter) so they couldn&39;t see her and stayed there till they were gone. She&39;s amazing and a fighter,” he said.

Provincial police spokesperson Captain FC van Wyk said neither De Lange nor her brother have opened a case yet at the Rondebosch police station.