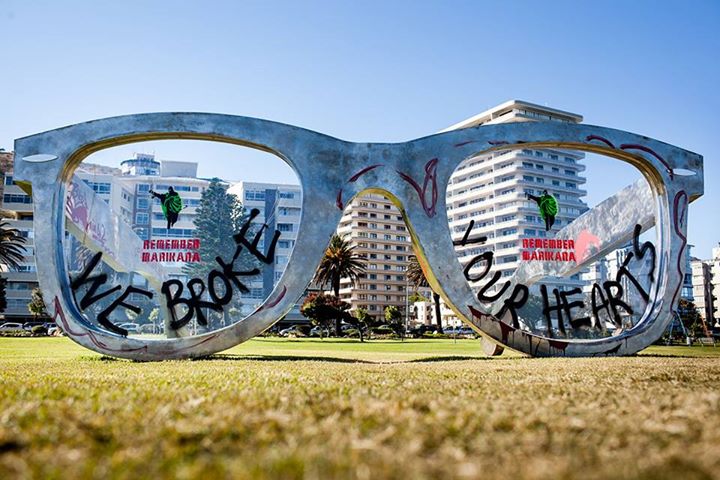 CAPE TOWN - Artist Michael Elion has responded to the vandalism of his controversial piece, Perceiving Freedom, by expressing fear for his life.

Elion said that he laid charges yesterday against a long list of people, even before the defacement took place on Sea Point promenade last night.

"It is an incitement of violence," he said.

The giant sunglasses, co-financed by eyewear maker Ray-Ban, were erected as a memorial to the late Nelson Mandela. They face Robben Island and are accompanied by a plaque with a picture of Mandela wearing sunglasses.

Elion and his work have been called disrespectful across social media.

Last night, the sculpture was defaced with the words "Myopic Art" stencilled on to them, as well as the words "We broke your hearts" spraypainted on the lenses. This is in reference to the victims of Marikana and in the centre of the lenses, is the famous image of the "man in the green blanket", Mgcineni Mambush Noki, above the sentence "Remember Marikana".

Elion, who called the incident a criminal act, said the damage is costly, because the frames are made from polycarbon and he is not sure if they will be able to get the spraypaint off. However, they will restore the sculpture as best they can.

"It is ironic, because after being endorsed by the Mandela Foundation, the very people claiming to uphold the noble principles of our constitution are the very people violating it," he said.

The local activist group Tokolos, are allegedly responsible for the vandalism. Early this morning, they sent out a statement which said they had "heeded the call" and welcomed the city to check out the new and improved Ray-Ban Madiba glasses.

They then updated the statement and added: "Tokolos Stencils intervenes in white supremacist corporatist art. Myopic art leads to and is a reflection of a myopic society. But on the master&39;s sunglasses, there is always space to broaden our vision so that we can all see the bigger picture."

Although he did not know who was responsible for the vandalism, Elion said he hopes the perpetrators are ready to face the full force of the law.

"Healthy debate is welcome, but this is inexcusable."