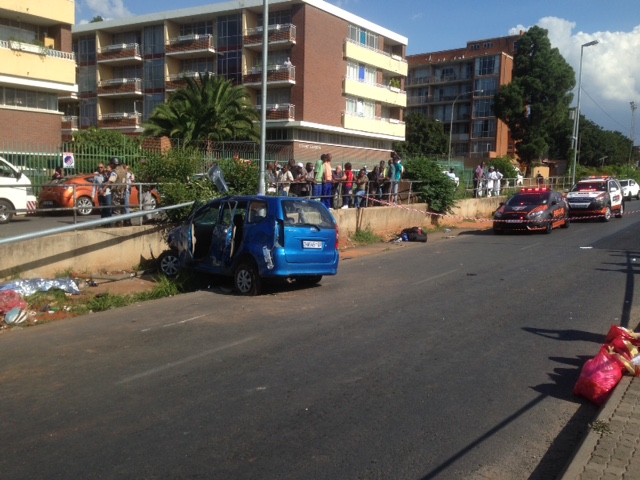 At least 16 school children have been injured in a collision on Louis Botha Ave near Corlett Drive.

JOHANNESBURG – A child and an adult have been killed after a car smashed into a group of children on Louis Botha Avenue in Johannesburg.

According to Netcare 911 paramedics, the driver lost control of the car after a collision with another car and ploughed into a group of children who were standing on a pavement.

(At least 16 school children have been injured in a collision on Louis Botha Ave near Corlett Drive. eNCA / Herbert Opland)

The injured children, who were about 16 in total, sustained minor and serious injuries.

Netcare 911 confirmed that two helicopters were dispatched to the scene to airlift the critical patients.

(At least 16 school children have been injured in a collision on Louis Botha Ave near Corlett Drive. eNCA / Herbert Opland)

Most of the injured children were between the ages of seven to nine-years-old.

The child who died was reportedly 12 years old. Resuscitation efforts were unsuccessful on the scene.

1 person has died & +-15 have been injured, 5 critically so. The @Netcare911_sa helicopter is airborne to assist. pic.twitter.com/xfEu7906BD

Majority of the injured were school children. A group of kids waiting for a bus, and school kids inside the taxi. @FatalMoves @ewnreporter