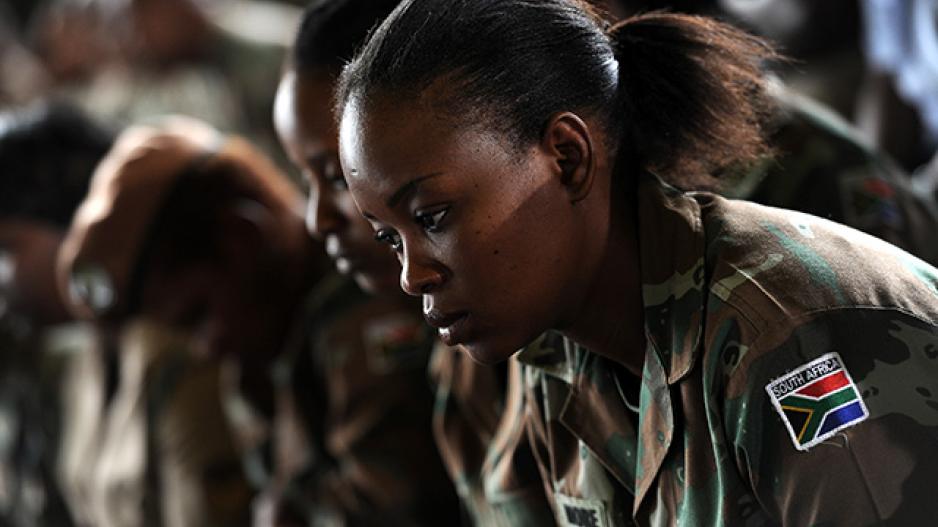 File: South African soldiers mourn the deaths of their colleagues, who were killed in the Central African Republic, during a memorial service at Swartkop Air Force Base in Pretoria on April 2, 2013.

Johannesburg - The death toll from a deadly ambush on South African soldiers in the Central African Republic (CAR) has now risen to 15.

Twenty-seven-year-old rifleman Lucas Moloke became the 15th causality when he died at the 1 Military Hospital in Pretoria on Sunday.

He had been in hospital since being evacuated from the country shortly after he was wounded.

He was one of 27 soldiers who were injured during a gun battle with the Seleka Coalition outside the capital Bangui on 13 March.

Thirteen soldiers died in the incident while the 14th died in a Bloemfontein hospital in April, two weeks after being discharged from 1 Military Hospital.

The South African National Defence Force (SANDF) at the time said the gun battle on the outskirts of Bangui lasted about 13 hours.

Earlier in May, the SANDF confirmed that all South African soldiers had been withdrawn from CAR following the bloodshed.

A memorial service for Moloke will be held at Tempe Church in Bloemfontein on June 6 and he will be laid to rest two days later at Mandela Park in Ladybrand, Free State.

“The Minister of Defence and Military Veterans, the Chief of the SANDF and Chief of Joint Operations, Chief of the South African Army would like send their deepest condolences to the family and friends on the passing away of a hero,” said Brigadier General Xolani Mabanga.