Car washed away in Pretoria as floods wreak havoc 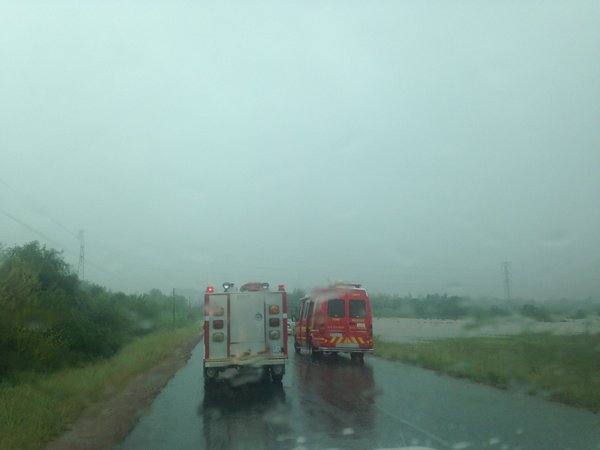 It's believed a car has been washed away, Tshwane EMS are on scene in the north of Pretoria.

PRETORIA – A car is believed to have been washed away in Pretoria as floods wreak havoc on the streets of the capital of South Africa and the majority of the Gauteng province.

Rescue divers were at the scene in the north of Pretoria trying to retrieve the lost vehicle from the water.

flashfloods wreack havoc in the capital. A rescue operation is underway in the North of Pretoria. pic.twitter.com/oBdQ37Edeh

Pretoria emergency services are urging residents in low lying areas to be vigilant while the rain persists.

“We advise the community, if you see there is a rise in water levels please try to evacuate that area. Before the water reaches your houses,” said Tshwane EMS spokesperson Johan Pieterse.

“And if possible try to channel that water away. But we know that some of these households are on the banks of rivers and streams and there is no way that you can try to manage that water once it comes in full flood. Get to higher points, and we could ask you to evacuate. Please adhere to the calls coming from emergency services and report these emergencies immediately.”

Pretoria emergency services &saps are trying to rescue a car that has been washed away. flashfloods pic.twitter.com/sq698SwNaV

Flooding in Tshwane is causing concern as the rain continues and emergency services have warned people to avoid low lying bridges.

“The serious concerns are the low water bridges, where people try to cross these bridges. And then the car ends up on that river or stream,” Pieterse said.

“Last night a car was washed down a low water bridge in Doornport.

“Early morning we also had to rush to an incident where the car was also stuck. Luckily we could manage to get that vehicle out, occupants are safe. But as we speak, we&39;re in the north of Tshwane where a car was also washed down a river. We were called by a local farmer in that area.

flashfloods at the Apies river in the North of Pretoria. Rescue mission about to be intensified. pic.twitter.com/5kcNqVRuhs

Johannesburg emergency services have also cautioned people to be wary on the roads as heavy rains continue.

"Around Smith Street you&39;ll recall we had a similar situation over drain flooding and New Canada road, most of the residents who use that area must be aware,” said Johannesburg EMS spokesperson Robert Mulaudzi.

“The challenge was when we have officials trying to alert them they don’t adhere to our calls, we just want to tell them to drive safely...We have had a number of incidents where trees falling on the roads and floods on the road. Most of the water level has dropped and motorists can use parts of the roads.”