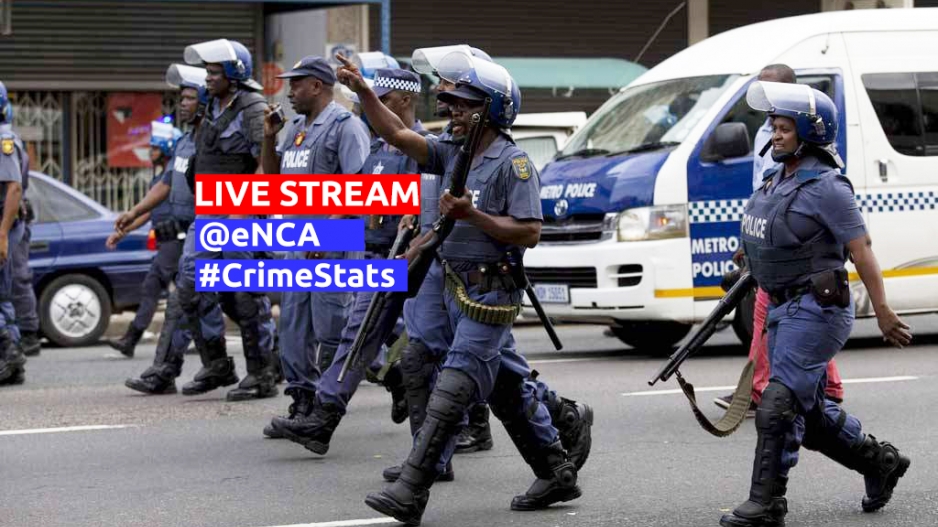 The National Police Ministry is set to deliver the country's latest crime statistics on Tuesday morning.

• Editor&39;s note: This live event has now ended. You may watch a recording of the proceedings in the gallery above.

For more information on crime in your area, visit www.enca.com/crimestats2015.

eNCA.com, in collaboration with the Institute for Security Studies, has launched an interactive map detailing crime statistics.

Ahead of the release of crime statistics tomorrow, the Institute for Security Studies&39; Gareth Newham explains what we need to be looking for, and what it means.

eNCA reporter Karyn Maughan is in Parliament for a preview on what to expect from the crime stats address.

Increase in work of police: 83.4% of population reported serious crimes and lead to the arrest and charging of 1795947 people crimestats

Minister Nhleko says police detected serious crimes, there is an increase of 16.6% CrimeStats

Crime surge continues - In SA 6 times more likely to be murdered than in US - http://t.co/qcSaOmbcQZ @afriforum CrimeStats

Contact crime, which comprises 34.4% of serious crimes, is up by 0.9% this year. No reduction of it is why people feel unsafe CrimeStats

The SAPS is improving the integrity of its statistics. Police Minister Nkosinathi Nhleko says while releasing crimestats

Nhleko is incompetent. Sad to hear his excuses. crimestats

Police Minister Nhleko highlights 10-year period SA has lowered crime, but there actually has been an increase over last 3 CrimeStats

Minister Nhleko: we still have an influx of undocumented migrants in our country CrimeStats

crimestats Lesser of 2 evils Police not doing enough & without them would be worse off Public choice under duress? https://t.co/GPkApGgvcW