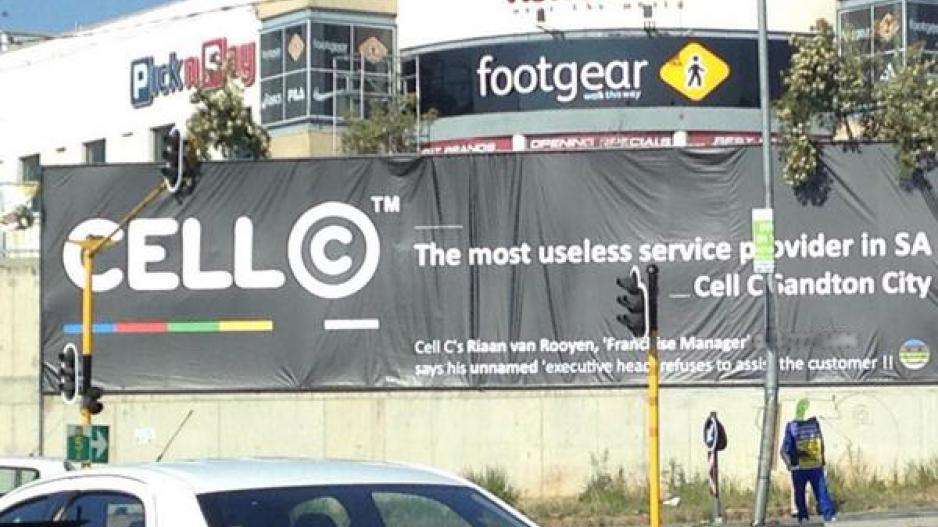 An angry customer has gone to extremes to express his dissatisfaction with the service he has received from Cell C by erecting this banner at a major intersection in Randburg.

JOHANNESBURG - Cellphone network provider Cell C will launch an urgent court action on Monday to have a banner set up in Johannesburg by a disgruntled customer removed, a spokeswoman said.

The application would be launched in the High Court in Johannesburg against the WorldWear Mall along Beyers Naude Drive and the customer.

"Letters of demand to remove the banner were issued to both the customer and the centre management at WorldWear Mall on Thursday evening," said spokeswoman Karin Fourie.

"Our demands were ignored by both the customer and the centre management and Cell C had to launch an urgent application to have the banner removed."

The banner, which appeared professionally printed and bore the Cell C logo, was prominently displayed on the wall of the WorldWear Mall along the busy Beyers Naude Drive.

"The most useless service provider in SA - Cell C Sandton City," it read.

It gave the name of the franchise manager and his phone number, claiming he had said that his "unnamed executive head refuses to assist the customer".

Fourie said Cell C was continuing with attempts to resolve the dispute.